The Albion Chapter (Michigan Alpha) of Kappa Mu Epsilon, the national mathematics honor society, is pleased to announce its new members for 2010. New members are Ben Copeland, Rachel Kain, and Robbie Sessions. KME members must complete at least three semesters of college and rank in the top 35% of their class; complete three college math courses, including at least one semester of calculus; and attain an average grade of 3.0 or better in all mathematics classes. Albion's chapter of KME was founded in 1937. Mark Bollman serves as corresponding secretary and advisor to the Albion chapter. Further information about the national organization is available at kappamuepsilon.org. Congratulations to the new KME members! 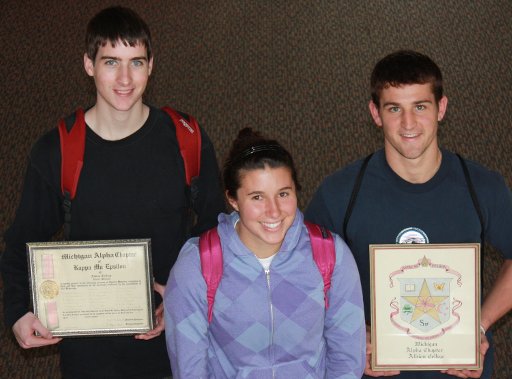 The results of the Putnam Mathematical Competition, held in December 2009, have arrived. Leading the Albion entries was Rachel Kamischke, with a score of 10, who was followed closely by Mingjia Yang with 9. Chen Chen completed Albion's team scoring with 1 point. The total team score of 20 is the highest achieved at Albion in recent years. Also participating for Albion were Eric Richardson and Kathryn Wagner. Congratulations to all team members!

Following in the footsteps of the Museum of Modern Art's Department of Architecture and Design in its acquisition of the @ symbol, Albion's Mathematics and Computer Science Department has acquired the Greek letter Pi into its collection of mathematical artifacts. "The acquisition is momentous," exclaimed a clearly elated emeritus professor Robert Messer. "We are all very proud of the acquisition," says chair Mark Bollman. The formal acquisition will hopefully raise the stature and prevalance of this important symbol. Many calculators contain a special key for pi, yet most modern keyboards in the United States do not. "I am ready for a Pi on my keyboard," says professor David Reimann.

Senior Kathryn Wagner has successfully completed her honors thesis, "Trigonometric Functions in the Biangular Plane" and will graduate with Albion College honors. Her work looks at analytic geometry in a coordinate system where two angles are used to denote points in two dimensions. Albion College honors are awarded to students in the Prentiss R. Brown Honors Institute who complete the four Great Issues Seminar courses, maintain a 3.5 overall GPA, and complete a major thesis project. Kathryn's research was supported last summer by a FURSCA grant, and her thesis was supervised by Professor Mark Bollman. Professors Nadiya Fink and Darren Mason also served on the committee evaluating her work.