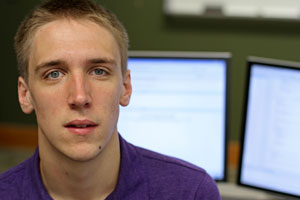 Jacob Engel is majoring in mathematics and computer science and is a member of the Prentiss M. Brown Honors Program. He is the son of Daniel and Elizabeth Engel of Warren,  Mich., and a graduate of De La Salle Collegiate High School.Jacob Engel, '13, is serious about play—as it relates to casino gaming, that is. Engel spent the summer studying odds and payouts as a participant in Albion's Foundation for Undergraduate Research, Scholarship and Creative Activity (FURSCA). A mathematics and computer science major, Engel is studying the statistics that underlie gaming through developing (and possibly marketing) unique casino games of his own.

At the suggestion of his FURSCA adviser, mathematics professor Mark Bollman, Engel started with Spider Craps, his own variation of the classic casino game played with eight-sided dice. Engel spent a couple weeks writing a computer program that created some 70,000 dice rolls. With this data, Engel adjusted the winning and losing combinations to give Spider Craps a house edge between 2 and 4 percent, in line with other casino games.

He's now beginning programming to analyze a yet-unnamed poker game that will be played with a special five-suit, 65-card deck. "This is a lot harder to program," he admits. "But the Spider Craps work went really well and I'm actually a little ahead of where I thought I might be at this point in the summer."

"As a mathematics and computer science double major, this FURSCA-funded research project has been a perfect fit," says Engel. Despite the theoretical success of Spider Craps, Engel sees a lot more work ahead, not all of which is math/CS-based. "We have to set payouts, come up with a play table and write a rule book, for starters," Engel says. "I might need a whole year’s worth of courses in marketing in order to create something with a chance of being successful."

The odds of hitting the game development jackpot are long (and not the focus of his research) but not impossible. Engel points out that games such as Texas Hold 'Em and Caribbean Poker have earned millions for their creators.

"I’ve played the occasional online poker game and tournament, but by no means do I play frequently," Engel says. "Dr. Bollman and I are interested in studying the games. Knowing the numbers and seeing the ways to play the system to one’s best advantage can very much spark interest in this particular hobby. Gambling is an enjoyable pastime that men and women have been participating in for a myriad of years."

And while Engel realizes not everyone may agree with his opinions, he is clear on the viability of this academic research. "Albion College is full of 'free thinkers'; this is not a place where they lock your brain in a box and bark lectures at it," he says. "This research has a practical application and [represents] advancement and development of ideas."