After Nearly a Decade, the Computer Science Major Returns to Albion

When Buket Aydas heard last year that Albion College needed someone to re-establish a computer science major, she was more than a little curious.

"Then a co-worker told me about it and said, 'You should apply. You'd be perfect for it,'" she said.

Her curiosity led to action, and now she is part of a department that is revisiting its roots and looking to the future with the return this fall of a computer science major that had been eliminated almost 10 years ago.

"Launching courses from scratch? I knew I would love to do that," she said. "It was one of the things that intrigued me. It's a big responsibility." 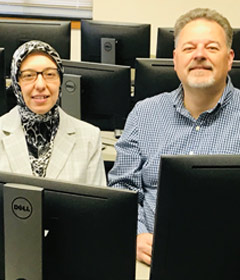 “There’s a long history of teaching computer science at Albion,” Reimann said, recalling former professors like Ronald Fryxell and Harold Connamacher who helped establish and grow the program at Albion. “It was popular enough and it was growing.”

But almost as soon as the major was eliminated there was a groundswell—slow at first, and then one that picked up steam as circumstances changed—that hoped to bring it back.

“I told the department that I supported the idea of a second computer scientist and for the computer science major when funding became available,” said Provost Marc Roy, now in his fourth year at Albion. “But they had to request it.”

It took almost two years of meetings with the College’s Curriculum Resource Committee, not to mention a commitment from a new College administration that included the support of President Mauri Ditzler to make it happen. But it happened.

And most believe it will pay immediate, as well as future, dividends in terms of attracting students.

“I think it’s important to help recruit good students,” said Roy, who was part of the team that helped bring back the major. “Computer science has become such an integral part of a liberal arts education.”

So this fall Reimann and Aydas, who joined the College’s Department of Mathematics and Computer Science last fall, will teach courses in the major.

Aydas comes to Albion from the University of Wisconsin-Milwaukee, where she earned her Ph.D. in biomedical and health informatics and specializes in such areas as artificial intelligence, machine learning and cybersecurity.

“This is so exciting for me,” said Aydas, who is teaching Computer Science I and Operations Research this spring. “We need to advance computer science really well because it has changed and we need to adapt.”

Roy said underclassmen who want to change their major to computer science will be able to do so and that the Mathematics and Computer Science Department has also enhanced its actuarial science curriculum.

Some of the new computer science courses in the fall include Computer Science I and II but also Software Engineering, Algorithms, Computer Organization and Program Languages. Aydas will also teach courses on cybersecurity and parallel computing.

“I strongly believe a lot of students will come to Albion because of the computer science major,” said Aydas, who also hopes to hold computer clinics at local high schools and middle schools. “It will help advertise our program.”

“In those intervening years I’d get questions about why we didn’t have computer science,” said Reimann, who still taught computer science courses even though it no longer was part of a major. “There is a demand for those who are trained in computational thinking and students like that are in higher demand."

It's also a new start for him and the continuation of an age-old goal.

“In the last 15 to 20 years in the Math and Computer Science Department, almost every student we’ve graduated has had a job lined up or went on to grad school,” he said. “They had definite plans for the future. And I think that reflects on what we do here and the demand for those skills.”