Award-Winning Teacher Rick Straughen, '03, Finds His Home in the Classroom

Even in those long-ago days when there were still no Facebook friends and Google had yet to become a verb, Rick Straughen, ’03, saw a career for himself in computers.

“I thought about a career in computer programming, but it didn’t seem that exciting being stuck in a cubicle all day,” he says. “That wasn’t for me.” 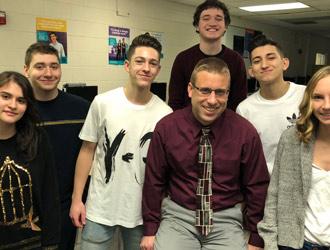 Rick Straughen, '03 (wearing tie, with some of his students), was named the 2018 Advanced Placement Teacher of the Year for the College Board's 13-state Midwestern Region thanks to his new approach to teaching computer science at Eisenhower High School in the Utica Community Schools district. (Photo: Tim McAvoy, Utica Community Schools)What did prove to be for him was a career in education, sparked by the single education class he took as a senior at Albion College.

Recognized by the College Board

Today, Straughen is in his 14th year teaching in Michigan's Utica Community Schools—at Eisenhower High School, not far from where he grew up in Sterling Heights.

A mathematics and computer science teacher, Straughen has built a following and reputation for his work in teaching a generation of students who grew up with technology in their DNA that there’s more to it than even they imagine.

“There’s still this void about what computer science is all about,” Straughen says. “Most kids have phones and they can’t program them themselves. And with every job, you’re going to need computer skills. It’s not going away.”

To that end Straughen developed several new computer science classes, directed originally for students in Advanced Placement but now open to all kids in the district. For his work, Straughen in February was named the 2018 AP Teacher of the Year for the College Board's Midwestern region, a 13-state area that stretches from West Virginia to the Dakotas. He received his award during a ceremony in Chicago.

“He is an advocate for the critical importance of expanding computer-science opportunities for all students,” Utica Community Schools Superintendent Christine Johns said in a press release. “Our region is a leader in automation and engineering, and I applaud his work to give students a competitive advantage for these high-paying jobs.”

‘All Kind of Clicked’ at Albion

Straughen notes the irony of a teaching award, given that he wasn't even originally thinking about becoming a teacher. He came to Albion for the combination of math, computer science and athletics.

“I was looking to run cross country and track,” he says. “I knew it was something I could do at [an NCAA] Division III school, and Albion was the first school I visited on my own.”

During his visit, he met with math professor Bob Messer and grew convinced that Albion was for him. “It all kind of clicked for me,” says Straughen, who majored in computer science and mathematics.

His interest in computer science was fueled by professor Dave Reimann.

“I took several classes with him,” Straughen says. “He was always helpful. I’d go in after class and always ask him questions. And because it was such a small class, I was able to get that attention. I had a great experience at Albion. It’s a large part of who I am.”

His interest in teaching began his senior year when he took an education class to fulfill his core requirement in gender studies.

“My sister is also a teacher and she had mentioned it,” Straughen says. “I had never thought about teaching until the first semester of my senior year when I observed at a high school class. It was interesting enough that I thought I might do it.”

He went on to earn his master’s in education at Saginaw Valley State University and almost immediately took a position teaching geometry and coaching track and cross country at Eisenhower.

It’s been in the last few years that Straughen has emphasized computer science, developing opportunities for more students to take Advanced Placement classes. He unveiled a new AP course last year on the principles of computer science that spans everything from how the internet works to cybersecurity. He has also actively recruited more girls to computer science through a club called Girls Who Code.

“I teach three different classes throughout the day and all the students in their math classes will spend at least an hour programming,” he says. “We’re just trying to expand and promote it. I’m really proud of what we’re doing here.”

And the interest shows. There are now more than 150 students signed up for his new computer courses, and Straughen is expanding the effort to the Utica district's three other high schools. “Next year we may have to have a second teacher to teach this,” he says.

And as for a career sitting in a cubicle as a computer programmer? Nothing could be further from Straughen's mind now.

“Now I work with kids,” he says. “And each day is a little different.”