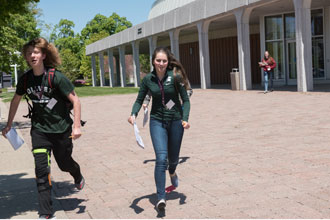 High school students embark on a scavenger hunt, part of the event.

Students from seven high schools in southern Michigan recently got a day off school to compete in Albion College's second annual W. Keith Moore Math Competition. The students competed both as individuals and teams, with pencil-and-paper quizzes, the "Pony Express" math relay, and even a math scavenger hunt that took them across campus.

According to Ellen Kamischke, visiting instructor and competition co-director, a number of Michigan institutions host competitions—but most are either for middle-school students or high school juniors and seniors.

In Michigan, "there really is nothing specifically aimed at the ninth- and tenth--grade students," said Kamischke, noting that Albion's Moore Competition is exclusively for this group. "Our competition helps bridge the gap between the middle-school contests and the more advanced competitions." 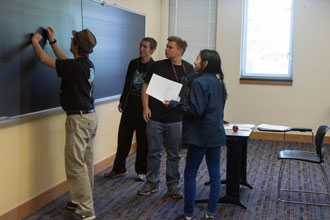 Students puzzle over the Triple Play, three problems in 15 minutes. Coming to Albion is another draw, Kamischke said, noting that only the University of Michigan offers a similar on-campus event.

"It's nice to 'rub shoulders' and see where everybody is [in terms of math]," agreed Battle Creek Area Math and Science Center teacher Luke Walker. "It's good for our students to see other accelerated kids and get an idea that others are doing the same things."

And while the focus was on "competition," Kamischke and event co-director Karla McCavit, mathematics instructor and director of the College's Quantitative Studies Center, made sure that "participation" was the focus.

"It was a little intimidating to come," said Will Carleton Academy teacher Sandra Anderson. She noted that some teams were from STEM magnet schools, or were extracurricular clubs who regularly did online competitions.

In contrast, Anderson's team was four volunteers from her school's 70-member student body. "They seem very comfortable with the activities," she said. "We're having a good time."

Two Greenhills sophomores agreed that "fun" was a major reason they wanted to do the competition a second time. For one student, it was also a surprising revelation of her progress as a mathematician. "Last year, I didn't know how to do some of the problems, and this year, I thought, 'Oh, wow, this is really easy,'" she said. "That was the best."

Albion's competition was named in memory of Keith Moore, a member of the Mathematics Department from 1952 to 1986.