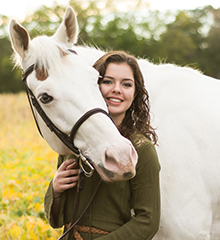 “I’ve always enjoyed it and I like them both for different reasons,” she said. “When I’m riding, I’m usually working toward a competition. When I’m skiing, I’m just relaxing, going down a hill and having a good time.”

They may seem like separate and mutually exclusive activities that require very different skills, but not for Darby. To her, there is not one without the other.

“I’ve just kind of always done them,” said the native of Caledonia, Mich., who is double majoring in kinesiology and art and minoring in management. “I just kind of squeeze them in.”

She is a member of Albion’s varsity equestrian hunt seat team and usually competes every weekend (she’s also vice president of the College's Equestrian Club). In her spare time—what she has of it—she has helped resurrect the College’s Ski and Snowboard Club and, for good measure, is president of the Astronomy Club.

Darby gained her love of horses and skiing from her parents, Daniel and Laura.

“My mom’s side of the family rode horses and both of my parents ski,” she said. “I ended up liking them both.”

She learned to ski at the family’s winter getaway at Boyne Mountain in Northern Michigan. Her favorite is downhill skiing but she also does slalom and just purchased cross-country skis that she hopes to use locally at the Whitehouse Nature Center.

She also ski-races every Thursday with a small group of Albion students and professors at Timber Ridge Ski Area, north of Kalamazoo.

As for riding, Darby came to Albion (and brought her six-year-old horse, Elvis, along with her) with the intent of joining the school’s equestrian team. She has since become one of the team's top performers, having qualified this year for the Intercollegiate Horse Show Association regional competition at Willowbrooke Farm in Plymouth, Mich. At that Feb. 24 event, she hopes to gain a slot in the IHSA Zone Competition, scheduled for April 7 at Otterbein University in Westerville, Ohio. 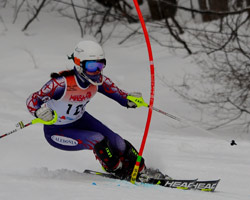 Darby has been skiing since she was 3 years old. She continues to enjoy it as president of the College's Ski and Snowboard Club.“I get the same adrenaline rush from both,” Darby said. “And I’m pretty competitive. I get that from my dad.”

“I think they kind of go together with the sense of balance and athleticism,” Gardner said. “I think a lot of people would find it impossible to give that kind of dedication to both, but there are rare people who can do that. I think she’s one of them. I don’t think I could have done it.”

Darby hopes to work in a career that involves prosthetics and orthotics, and would like to continue the dual passions that have become such a part of her life.

“I don’t know what the future holds,” she said.

Chances are, though, horses and skis will figure in somewhere.