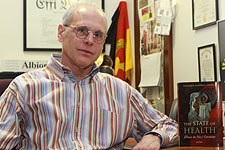 Geoff Cocks previously authored Psychotherapy in the Third Reich.Historians have held to the assumption that Nazi Germany built a society where individualism was stamped out because everyone in the "master race" was subordinated to the collective "racial community." While the racial community was a reality, Albion College history professor Geoff Cocks argues the individuals still looked out for their own material interests and that this was exhibited most significantly in the way Germans were concerned about their health.

Cocks used all of the skills he has developed as a historian to assemble first-person accounts—like a two-volume diary by Victor Klemperer, novels by Christa Wolf and Hans Fallada, and archival documents from Europe, the United States, and Israel—to complete his new book, The State of Health: Illness in Nazi Germany. The book was published by the Oxford University Press in the United Kingdom in January and will be released in the United States this spring.

Albion College history professor Geoff Cocks maintains Stanley Kubrick was a master at creating indelible images on film that force the viewer to replay each scene, much like how a coach rewinds and replays a game or practice for bits of information. Instead of trying to interpret why a play worked or failed in competition, however, Cocks intensely analyzes the visual elements in Kubrick’s films to decode a deeper message.

In Rodney Ascher’s Room 237, which made its debut Jan. 23 at the Sundance Film Festival in Park City, Utah, Cocks provides insight into how Kubrick's use of objects, numbers, colors, and music in the 1980 classic The Shining relate to the Holocaust.

"History is not something to just be studied in dusty old textbooks ... Rather, it is a living, breathing narrative that enriches and influences us here today," writes Colleen Ouendag, '12, as she describes her experience this summer as an intern at the Gerald R. Ford Presidential Museum in Grand Rapids. Ouendag, who is pursuing an individualized major in American studies, witnessed that narrative play out firsthand this month at work, as she was involved in the museum's preparations for the memorial and funeral service for former first lady Betty Ford.

While preparing to join the AustraLearn program at the University of Auckland, I began to research the Kiwi culture, but could only read the descriptions of "laid back" and "thrill seeking" so many times. I departed the United States mid-February 2011, not too sure what would come of this adventure. While meeting new people is always good fun, it was a bit scary leaving all my friends and family behind for five months.