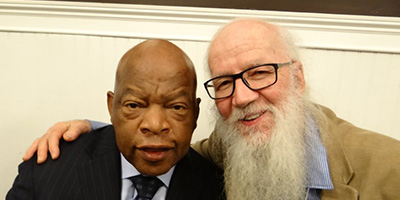 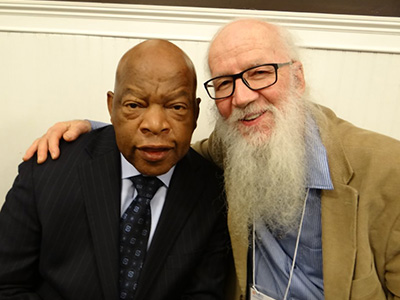 John Lewis and Wes Dick share a moment in March 2015 in Atlanta.Late Friday night, July 27, television programs were interrupted by the very sad news that Civil Rights giant John Lewis had died following a battle with cancer. My generation was introduced to John Lewis through his bravery and we followed his political career as a congressman from Atlanta, Ga.

As a professor, one of my joys is telling his story to my history students. John Lewis is featured in the fabled Eyes on the Prize 1987 documentary series, which remains a staple in my history class The 1960s.

I first met John Lewis in Benton Harbor-St. Joseph, Mich., in 1997 and he signed my copy of the series companion book, also titled Eyes on the Prize. After he published his autobiography, Walking With the Wind: A Memoir of the Movement, I had the good fortune to meet him at the University of Michigan. When I told him about my history class, he signed his memoir: “To the 1960s Class, Keep the faith. Best wishes, John Lewis, 1/10/2000.”

In 2008, I participated in Julian Bond’s “Civil Rights South Seminar: In the Footsteps.” The experience was transformational, and I returned for eight years through 2015. We traveled through Georgia, Alabama, Tennessee, Arkansas, Mississippi and Louisiana, visiting Civil Rights hallowed ground and meeting Civil Rights greats, including John Lewis, whom we met each year in Atlanta. No one could describe the story of Selma like John Lewis. I have chosen for this occasion to describe a part of the Civil Rights Seminar as I wrote about it in 2008.

Selma, a sleepy little town in the Alabama Black Belt with racist sheriff Jim Clark, became the center for the campaign to secure the right to vote in 1965. Churches played a central role in the Civil Rights Movement, and Brown Chapel A.M.E. Church in Selma was the command post and “spiritual heart” of the local voting rights campaign. During the organizing for voter registration, Jimmie Lee Jackson, a young demonstrator, was fatally shot by Alabama state troopers while defending his grandfather. Outrage over Jackson’s death led to the idea of a march from Selma to Montgomery, the state capitol. Governor George Wallace vowed to stop the march.

The original march was set for Sunday, March 7. The marchers began by walking over the Edmund Pettus Bridge which spans the beautiful Alabama River. They were greeted on the other side by a “sea of blue,” Wallace’s state troopers and a posse on horseback, and by whips, cattle prods, night sticks, horses’ hooves, and tear gas. Many of the marchers were injured badly, including John Lewis, who thought he was going to die. The ABC network interrupted its movie of the week, Judgment at Nuremberg, to show scenes from Selma. Viewers thought they were witnessing Nazis beating up their victims before realizing they were watching America in 1965. Known as “Bloody Sunday,” the police brutality shocked many Americans, including President Lyndon Johnson. The civil rights movement made sure that the 54-mile march from Selma to Montgomery continued along highway U.S. 80 (also known as Jefferson Davis Highway.) With great jubilation, they reached Montgomery on March 25. During that time, others also paid with their lives, including Detroit housewife Mrs. Viola Liuzzo, whose memory the Albion NAACP has honored.

That summer, President Johnson signed the Voting Rights Act. John Lewis told us that the Voting Rights Act was written on the highway from Selma to Montgomery and it was paid for with blood. Barack Obama’s presidential campaign rests on the shoulders of those who marched from Selma to Montgomery. On our history tour, we were witnesses to outpourings of Black pride in Obama’s candidacy. Selma was a reminder that voting is a right and a duty. As one civil rights activist said: to not vote is tantamount to spitting on the graves of those who made such noble sacrifices.

On March 5, 2008, with Julian Bond, we left Brown Chapel and walked across the Edmund Pettus Bridge. The sky was blue and the sun was out. It was haunting to be in that place where America struggled to become “a more perfect union.” And it was inspirational. 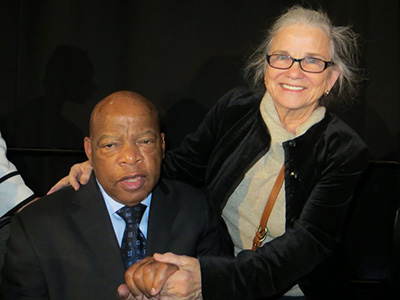 Leslie Dick with John Lewis during his February 2015 visit to Michigan.In 2011, I was in the audience that heard John Lewis speak at the dedication of the Martin Luther King, Jr. Memorial in Washington, D.C. Recently, I met up with John Lewis at Michigan State University and the University of Michigan when he spoke about March, a graphic historical portrayal of his civil rights journey. Through the Albion NAACP, we introduced Albion youth to the fabled John Lewis, who had the joy of meeting him and having him autograph their books.

More Albion youth learned about John Lewis when the film Selma played at the Bohm Theatre. I was invited to give a Selma seminar for the Sisters Influencing Society (SIS), an Albion youth group, and, naturally, I gave John Lewis a shout out. In 2016, the Albion NAACP chartered a bus to Washington, D.C., for the dedication of the Smithsonian National Museum of African American History and Culture. Albion community and college bus riders were privileged to hear John Lewis and President Obama deliver keynote speeches on the importance of African American history.

John Lewis made history. He also believed that history matters. He wrote in his autobiography: “Know your history. Study it. Share it. Shed a tear over it. Laugh about it. Live it. Act it out. Understand it. Because for better or worse, our past is what brought us here, and it can lead us to where we need to go.”

In the post-2016 election era, I, along with millions, looked to John Lewis’ wisdom, witness and advocacy in countering the assault on voting rights and the resurgence of racism. In these times that “try the souls of men and women,” he remained a beacon of hope. If you see injustice, he urged his audiences, “get in the way and cause some good trouble.” We honor John Lewis’ legacy by “keeping the faith” and keeping our “eyes on the prize.” We honor his life by speaking up, by taking nonviolent action on behalf of civil and human rights, and by voting.

My wife, Leslie, and I shall always treasure the unexpected May 5, 2018 letter addressed to us at our home at 700 E. Michigan Ave. It read:

Congratulations on your spectacular achievement of receiving honorary degrees from Albion College. I am inspired by all your tireless work and dedication. …

Receiving an honorary degree is a remarkable accomplishment. I always enjoy seeing others doing their part in making the community a better place. I wish you all the best in your future endeavors.

Dr. Wesley Arden Dick joined the faculty of the History Department at Albion College in 1968.