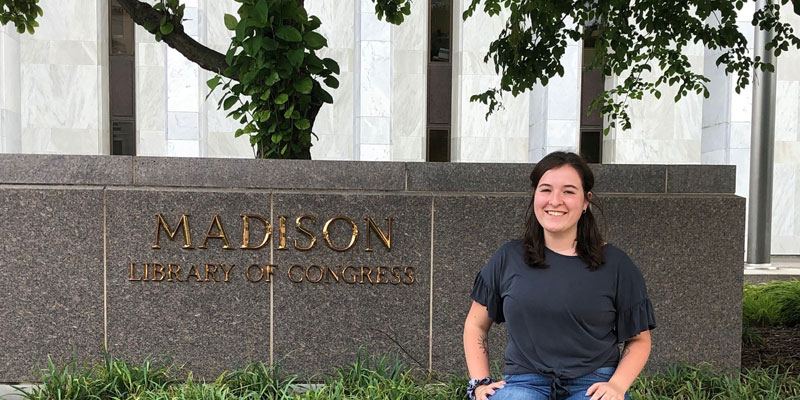 Lauren Bergeron, '21, pictured during a research trip to the Library of Congress in Washington, D.C., is majoring in history and geology with a minor in geographic information systems. A member of the Prentiss M. Brown Honors Program and the Center for Sustainability and the Environment, Bergeron is the child of Lisa and Thomas Bergeron of Riverview, Mich., and a graduate of Taylor Preparatory High School.

Lauren Bergeron, '21, was one of just 60 students nationwide chosen to participate in the Council on Undergraduate Research's "Posters on the Hill," an event specifically designed to showcase current student research for federal lawmakers and other government officials. On top of this honor, Bergeron was further invited to the inaugural Johns Hopkins University Richard Macksey National Undergraduate Humanities Research Symposium, a mega-event involving more than 500 students.

"I was incredibly surprised when I learned I had been selected for Posters on the Hill. Throughout the application process I was constantly reminded of the competitiveness of the program," says Bergeron. "When I received the invitation to the Hopkins event, I was overjoyed to have another opportunity to share my research."

Unfortunately, due to the COVID-19 pandemic, Bergeron will not be sharing her work with thousands in person, nor will she get the chance to meet her federal representatives in their D.C. offices, or network with peers and potential graduate school mentors. (The Johns Hopkins event has shifted to an online format.) She can, however, take solace with the knowledge that Albion is represented among the country's top student research programs.

Bergeron's project, done during the summer of 2019 with grants from the College's FURSCA program and the Great Lakes Colleges Association, explored attitudes of Union soldiers toward white Southerners during the Civil War. Not surprisingly, Bergeron discovered that Northerners didn't have very positive attitudes towards white Southerners. The underlying dislike, however, "was much deeper than politics or commitment to a cause," Bergeron says. "Rather, white Northerners saw themselves as 'culturally incompatible' with their white counterparts in the South." 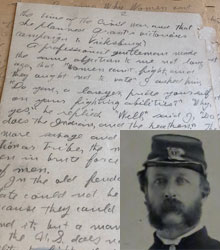 Detail from a letter written by Eben Fiske in 1861, in the collection of the Massachusetts Historical Society.

For instance, in contrast to the stereotypical image of the white "Southern belle," Bergeron found instances of Northern soldiers describing Southern women as "unladylike," scandalized by their use of tobacco and vulgar language. Union soldiers also described Southerners as being dirty, uneducated, even lacking a sense of humanity.

"My preconceived notion of the material was that the divide between the North and the South was purely political and could be easily repaired. However, I quickly realized that although Union soldiers were fighting to preserve the Union, the Union may have never truly been united," Bergeron reflects. "Once the Union soldiers entered the South and began to interact with white Southerners, I think they realized that they were not just fighting to preserve the Union; they were fighting the South’s entire way of life."

In addition to using digitized scans of original materials available through online sources, Bergeron traveled with Julian S. Rammelkamp Professor of History Marcy Sacks to the Massachusetts Historical Society and the Library of Congress, where she studied more letters and diaries, many of which were all but illegible.

"Some days I would walk away from the archive feeling accomplished, and other days—I could spend a day reading pages of terrible handwriting and find nothing I could use," Bergeron recalls. "However, by the end of the summer, I definitely gained an appreciation for the patience necessary to complete research of this nature."

"When Lauren first began working for me through the Student Research Partners program, she was entirely unfamiliar with the methods of conducting history research," explains Sacks, who specializes in African American and 19th-century American history. "She learned very quickly, and then she soon began sharing with me fragments from Civil War-era diaries that piqued her interest, unrelated to my project. That curiosity turned her from a worker to a colleague. We shared material with each other, and that was joyful as we explored material at the archives."

Bergeron is a student worker in the College's library archives and intends to continue document-based historical research. But she also plans to take her research skills in a completely different direction: a double major in history and geology, Bergeron will spend next fall doing a directed study on volcano-ice interactions in Iceland.

That's in the future, however. For now, Bergeron is focused on her history presentations and the gratitude she feels for Sacks, her mentor. "Dr. Sacks constantly encouraged me to dig deeper and be the best student I could possibly be," she says. "Through this research and the relationships I gained, I can say I now have a better appreciation of what makes Albion College unique and worthwhile."