Elijah Shalis, ‘02, has always been intrigued with history and, more specifically, the rich, complicated and fascinating world of genealogy.

“I’m adopted so I’ve always been fascinated with genealogy.” he says. 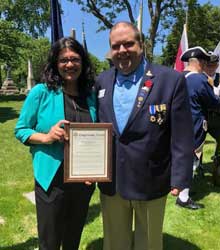 Elijah Shalis, ’02 (right), poses with U.S. Rep. Rashida Tlaib during the June 22 event at Detroit’s Elmwood Cemetery for James Robinson, a slave who fought for the U.S. in two wars and finally received his military honors after 151 years.

When the Ann Arbor native came to Albion College, he decided to major in computer science and political science until a troublesome fact became clear to him.

“The math got too hard,” he says with a laugh.

So he embraced his love of history, picked that as his second major, and dove into a variety of history classes at Albion.

“History has always been sort of my fun topic,” says Shalis, who took such classes as Slave Societies of the Americas, Colonial American History, East Asia History and 1960s Environmental History.

It was his love of history that almost two years ago brought him in contact with the name James Robinson, a slave from Maryland who fought for America in the Revolutionary War.

“He’s probably the most significant African American veteran of the American Revolution,” Shalis says. “I haven’t run across any others who were quite so significant. It’s pretty incredible.”

Shalis became aware of Robinson as part of a project to highlight little known topics for the proposed National Liberty Memorial to honor African Americans who fought in the Revolution planned for the National Mall in Washington, D.C.

That’s when he learned of Robinson, who started life as a slave in Maryland and joined an American infantry regiment to fight for a country’s independence that was not available to him. 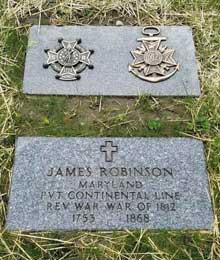 The grave marker for Private James Robinson with the acknowledgements of his service in both the American Revolution and the War of 1812.

He fought in the Battle of Brandywine in Pennsylvania in 1777 and in the celebrated Battle of Yorktown in 1781 where, according to Shalis’ research, Robinson stormed a British rampart and killed three British soldiers. After the battle, French General Marquis de Lafayette awarded Robinson a Gold Medal of Valor.

Soon afterward the British surrendered, but instead of receiving his freedom as promised, Robinson was sold back into slavery and eventually ended up in Louisiana, where he fought again for America in the Battle of New Orleans in the War of 1812.

Shalis said records show that Robinson was living as a free man in Ohio by the 1840s and, at the age of 107, he moved to Detroit with his wife and son where he remained until his death in 1868 at the age of 115, the last known living African American Revolutionary War veteran.

Upon his death Robinson was buried at Detroit’s Elmwood Cemetery, but with none of the recognition from his years fighting for America.

So Shalis, working with both the Michigan Society of the Sons of the American Revolution as well as the 1812 group, purchased bronze emblems representing the battles in which Robinson fought. And a ceremony, complete with military honors, a volley salute and speeches from local and state elected officials was held at the cemetery June 22.

It was rewarding and fulfilling, Shalis admits, but it wasn’t easy or quick.

“I had to get permission from both societies for the grave markings,” he says. “And this is an all-volunteer group with mostly older people, so it took a year to get approval to do it. That’s pretty normal for one of these grave dedications, but it was worth it.”

“I thought maybe the Free Press would show up,” he says. “But I didn’t know it would be as big as this. It’s a real sense of accomplishment.”

Now Shalis is researching another African American Revolutionary War soldier. But he first must find where he’s buried.

Then again, as Shalis has learned, that’s what makes it all worthwhile.