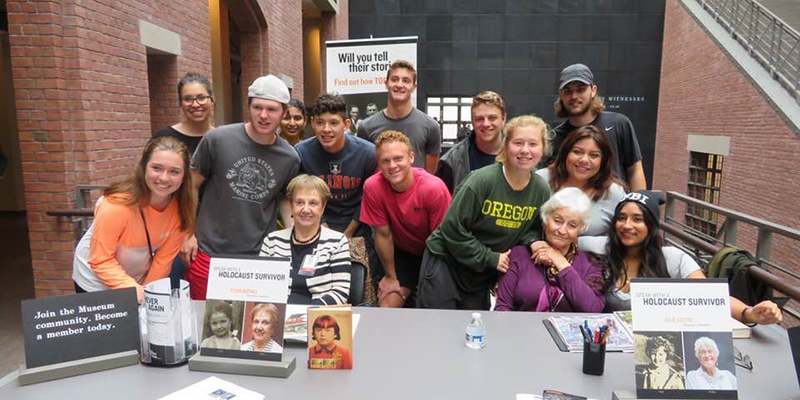 Our First-Year Seminar, A Sense of Place: Albion & the American Dream, travels to Washington, D.C., each November. We visit the United States Holocaust Memorial Museum, always a sobering and eye-opening experience for our students. Our class, focused on the history of small-town Albion, is drawn to the extraordinary exhibit of Eishyshok, a small Lithuanian town, whose citizens, including the young and the old, were beautifully photographed. The exhibit, entitled “The Tower of Life,” encompasses 1,600 photographs, three stories high. Visitors look into the eyes of those so beautifully portrayed. The entire Jewish population of Eishyshok was massacred by the Nazis. In the vastness of the horror of the Holocaust, the Eishyshok “tower of faces” personalizes the human story.

This year’s class also found another powerful way to relate to history. Our students met two Holocaust survivors who volunteer at the museum to share their stories. Sylvia (Perlmuter) Rozines was born Sylvia Perlmuter on January 20, 1935 in Lodz, Poland. Sylvia invited us to come closer to hear her dramatic story of the 1939 Nazi invasion of Poland and the occupation of Lodz, where Jews were forced into a ghetto.

Her parents and older sister were forced to do labor for the Germans. Before long, the Germans began rounding up the children too young to work to deport them to a death camp. Sylvia’s father found hiding places for her, often day-by-day, and sometimes in the cemetery. Ultimately, the remaining 75,000 Jewish residents of the Lodz ghetto were “told to pack their belongings and report to the train station.” Most were sent to Auschwitz. Sylvia’s parents and sister were among the few Jews retained to clean the Lodz ghetto. Young Sylvia was still hidden out, this time in a cellar with 11 other children. 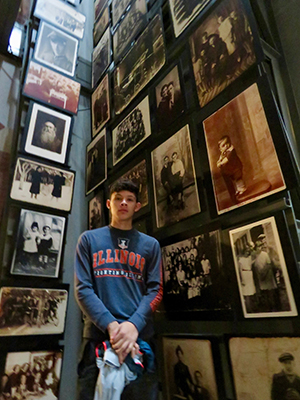 First-year student Ricardo Rocha stands amid the museum's "Tower of Life" exhibit.Sylvia noted, “In 1945, the war ended. The Germans surrendered, and the ghetto was liberated. Out of more than a quarter-million people, only about 800 walked out of the ghetto. Of those who survived, only 12 were children. I was one of those 12.”

Sylvia spent her teenage years in Paris, immigrating to the United States in 1957. She married David Rozines, a Holocaust survivor, in Albany, N.Y., raised a family and had a career in the New York school system. Following her husband’s death, Sylvia moved to Washington, D.C., and volunteers at the museum.

Our students were mesmerized by Sylvia and Holocaust child survivor Julie (Klestadt) Keefer. Our seminar mission was to emphasize the importance of remembering and not forgetting the Holocaust and to comprehend its relevance for our lives and times. By sharing their stories, Sylvia and Julie demonstrated the value of living history for our students. Sylvia and Julie had experienced the dark side of humanity as children, had come so far, and in their elder years were still committed to tell the world what they had witnessed.

Sylvia autographed a book based on her life with these words: “To Albion, the American Dream.” When we said thank you to Sylvia and Julie, they thanked us for visiting the museum.