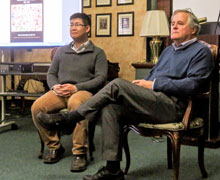 An almost forgotten family history reveals a grandfather's past as a noncombatant war hero in the first book published by Albion's newest history professor, who is just finishing his first semester on campus. Joseph W. Ho, with University of Michigan emeritus professor Charles Bright, is co-editor of War and Occupation in China: The Letters of an American Missionary from Hangzhou, 1937–1938. Ho and Bright shared the equally fascinating story of their collaboration at a book release party on November 16.

Bright told the audience that, like many Americans, he had been "mostly bored" listening to his grandfather's stories as a child. However, he was the sole professional historian in the family, and in the 1990s he uncovered 65 private wartime letters written by his grandfather, Robert McMullen, to his wife, Emma, who left China in 1937 as Japanese forces moved toward their adopted hometown.

The letters included descriptions of refugees, air battles overhead and Japanese forces invading Hangzhou. They were also full of references to people, places and things intimately familiar to his grandparents, but completely unknown to Bright. "So I sat on it," Bright said—for nearly 20 years. 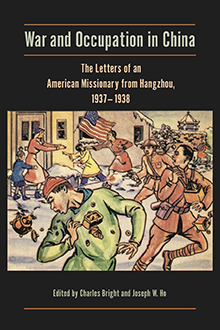 War and Occupation in China was published in October 2017 by Lehigh University Press.

Then in 2011, Bright showed the letters to Ho, a University of Michigan doctoral student researching the cultural and visual histories of American missionaries in modern China. "When I saw this material, I was impressed by this first-person, on-the-ground perspective," said Ho of the letters, which were written once or twice weekly for a year.

"As I read the letters, I found myself slipping into the shoes of Charlie's grandfather," Ho added. "It was thrilling. I knew we needed to annotate the letters, to make them more accessible and more understandable, to us and to a wider audience."

The research uncovered a committed and influential community leader far different than the genial grandfather of Bright's childhood memory. A resident of China for more than 25 years, in 1937 Robert McMullen was provost of Hangzhou Christian College and was responsible for both the campus and the employees when war forced the institution’s closing.

McMullen was also president of the International Red Cross in Hangzhou, and he addressed the overwhelming logistics of providing food, shelter and protection for Chinese refugees who flooded into the district. This protection included McMullen's negotiations with occupying Japanese military officers, both to safeguard the college campus and to gain more humane treatment of Hangzhou's citizens and refugees.

Many other details and "back stories" in the letters were less clear. Who was Dr. Fred Manget in charge of the local hospital? Why did McMullen mention hearing "Alone, Alone" on the radio? Ho and Bright's research took them from university and church archives to 1930s pop culture and war histories, to public and private online resources, all in Chinese and English, to explain the significance of every detail in the letters. 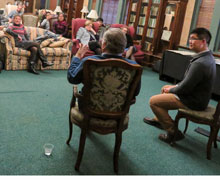 Ho (right) and Bright answered questions in the Wendell Will Room.

Some details are lost to history. Ho and Bright were unable to fully identify the Japanese military officers mentioned (often by last name only) in the letters. Other research uncovered surprising ties to world history. Manget went on to save the life of World War II flying ace Robert Scott, and the college’s no-nonsense military drill instructor eventually became a major general in the People's Liberation Army.

"The work really isn't quite done yet," Ho said. "It's a collection of primary sources meant to guide other historians in the future, who may take up the strands we haven't been able to tie up neatly."

In this light, Ho and Bright are now working on a digital repository of supplementary material (hosted by the University of Michigan) to assist future researchers, as well as pursuing a possible translation of the volume into Chinese. To make the latter a reality, Ho is collaborating with faculty and graduate students at Zhejiang University in Hangzhou—which coincidentally occupies the same campus that once housed Hangzhou Christian College.

Both professors are looking forward to sharing their work with Chinese scholars, bringing the letters back full circle to the city and communities they documented so many years ago.