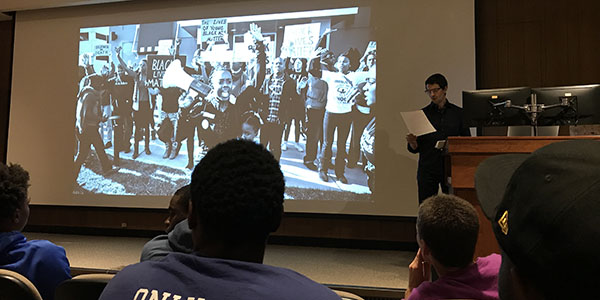 Ben Greenberg, an investigative journalist who focuses on cold cases and unpunished violence during the Civil Rights Movement, spoke to a standing-room-only audience in Bobbitt Auditorium on September 13 about more recent history for the annual Coy James Memorial Lecture. 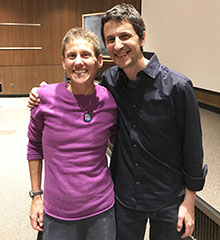 History professor Marcy Sacks with Ben Greenberg.Through remarks titled "Finding Truth in Police Killings of Young Black Men," Greenberg explored police justification in the 1962 death of Army Cpl. Roman Ducksworth, Jr., and the 2014 death of teenager Michael Brown. For each story, Greenberg described the incident and mapped the tragic killing in detail, sharing the conflicting testimonies that continue to surround each case.

During the question-and-answer period following the lecture, one student asked Greenberg how he felt about the idea that our society, in terms of racial issues and police brutality, is still in a similar place as it was in the Civil Rights Era. "It makes me feel despair," Greenberg responded, "but also that I have to do my part."

After questions, many students and professors stayed to talk one-on-one with Greenberg. Among them was history professor Marcy Sacks, who has known Greenberg since they were young kids but hadn't seen him in more than 30 years.

Each year the Albion College History Department invites a distinguished scholar in U.S. history to share their work with the faculty, students, and community at large. This endowed lecture series was established to honor the late professor Coy James, a much-revered member of the History faculty for many years.