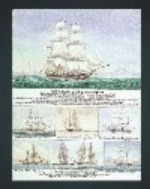 Unloosing the Chains: The Royal Navy’s War Against the Slave Trade, a Chapter of the Pax Britannica

Barry Gough, distinguished Canadian maritime and naval historian, will explore a crucial chapter in world and naval history: Britain’s campaign to end the African slave trade and in particular the Royal Navy's long, costly, and not always successful struggle to strangle the trade at its source.

Dr. Gough (Ph.D., D.Lit., University of London) has taught at Wilfrid Laurier University, and held numerous visiting appointments including at Duke, the University of British Columbia, Australian National University, University of Natal, King's College University of London, and the Scott Polar Research Institute, Cambridge. He has also served as a historical consultant for Great Lakes shipwrecks research and the Alaska inland waters case on behalf of the U.S. Department of Justice. Among his honors, Gough received the Clio Prize of the Canadian Historical Association and the Lieutenant-Governor’s Medal for Historical Writing given by the British Columbia Historical Federation. Dr. Gough has authored several riveting histories of exploration on the high seas, including Fortune's a River: The Collision of Empires in Northwest America and Juan de Fuca's Strait: Voyages in the Waterway of Forgotten Dreams.

The annual Yinger Lecture is given in honor of the many members of the Yinger family who are graduates of Albion College. The Rev. Emma Bancroft (class of 1904) and George Daniel Yinger (class of 1904) were the parents of six Albion College alumni. The lectureship was established by many families and friends, in order to sponsor distinguished lecturers in religion, drama, English literature, history, and sociology.

For more information on Dr. Gough or about his visit, contact Chris Hagerman, associate professor, at .

The public is welcome, and a reception will follow the lecture.