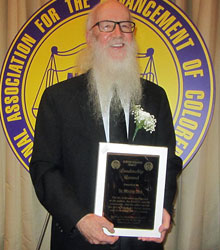 "I have accepted these honors with humility and gratitude," said Dick. "I believe the awards are recognition of a long-term commitment to civil rights and social justice and a commitment to the community. In my case, that commitment symbolizes the interdependence of Albion and Albion College."

Albion NAACP President Bob Dunklin noted that Dick has served the branch in numerous ways, currently as second vice president and a member of its legal redress committee. In addition, Dick's six civil rights history trips with Julian Bond have benefited the branch. "Wes goes on the trips, but he brings information back to all of us," Dunklin said. "He does this for the branch, and this is something we wanted to recognize with our award."

Dunklin was also among the many community leaders at the recent dinner who spoke of Dick's work on behalf of community engagement, civil rights and other social justice issues. "It was more than appropriate for us to recognize Wes," said Dunklin. "This was a good time to let him know how some of the community people feel about him and all he's done in Albion."

Dick said that his community involvement began with Albion Public Schools, which his four children attended between 1968 and 1998. Beyond that, "the 1980s anti-Apartheid movement in South Africa proved to be a defining moment. I was involved with students and faculty in protests pressuring Albion College to divest," he recalled.

"Community and NAACP members joined us. Because of this solidarity, I became a member of the NAACP and today, the Albion branch is family," Dick concluded. "The joy that comes in working for common causes with Albion citizens has been the community’s gift to me."

A specialist in American history, Dick has incorporated the Albion community in much of his research and teaching. He teaches the popular first-year seminar "Albion and the American Dream" and received major grant funding to create an interdisciplinary research seminar, "Boom, Bust, Recovery – Explorations of Albion, Michigan the Last 50 Years." Dick also regularly invites veterans and other local citizens to address students in his courses.