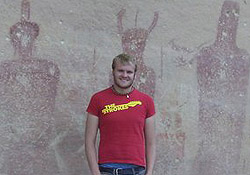 Zane Havens, ’12, hasn’t met a riverbed he hasn’t liked. His grandfather Bill competed in canoeing events in the 1948 Olympic Games, his grand uncle Frank was a two-time Olympic medalist in canoeing, and his father, Keith, Albion College's swimming and diving coach, twice participated in the Olympic Trials in flat-water canoeing.

It’s no surprise, then, that Havens’ research interest at Albion has kept him close to waterways on which he could paddle. He spent the summer of 2010 studying the cloudiness of the water in the Kalamazoo River for a project funded by the College’s Foundation for Undergraduate Research, Scholarship and Creative Activity (FURSCA). The FURSCA experience opened the door for a 2½-month internship with the Bureau of Land Management’s field office in Grand Junction, Colo., where he took measurements of stream discharge and looked for springs in the desert.

“A lot of it was doing basic tasks for the hydrologist at the BLM and learning the ropes of using these tools,” said Havens, an earth science major who is completing a concentration in environmental science and a minor in geographic information systems. “I learned the U.S. Geological Survey method of recording hydrology and now, when I visit the website and see these discharge readings, I have a general idea of how that works.”

“It is a high desert region, they don’t have a lot of water going through the area, but they try to keep a fair amount of agriculture and grazing going on, so they are going to have a certain diversion of streams to provide water for crops and cattle,” he added. “They have to keep an eye on how much water they have in the streams so they don’t overdivert and kill an entire ecosystem. I did a lot of resource management and figuring out how much water could be diverted from this stream and how many chemicals, manure, and fertilizer could be put into the stream before it becomes too toxic.”

While he’s unsure of his ultimate career path, Havens credited the internship for providing one of the most educational summers of his life, adding that he would be eager to work for the government again if the opportunity arose.

“Going out and seeing what it’s like to be in a government job, and what it’s like to have deadlines you have to meet for certain projects, and not having a textbook to go to when you need to figure something out—gaining the confidence to complete a task on my own was just as important as the actual skills I learned on the job," Havens said.

“One of the problems they have in Colorado is a geological unit in the area called shale that is high in selenium, which inhibits the reproduction of trout in the area,” he added. “There is a constant balance between the farmers and the conservationist groups who want to preserve the stream. Everybody I came into contact with in the government office was just trying to do what they thought was best for everybody who depended on the environment.”

‘You never run out of things to do, you run out of time’
A member of the swimming and diving team as well as the canoe club at Albion, Havens is an avid outdoorsman. He noted there is always some activity—hiking, mountain biking—to enjoy. The adjustment to living in the high altitude proved to be a challenge, but he was in great shape when the canoe club traveled to North Carolina in September for the Outdoorsman Triathlon.

“On one side was a national park and on the other was a national monument, and especially for a geologist, it was everything you could ever want,” Havens said. “I was struggling behind my bosses, who were a good deal older than me, when we were hiking up mountains when I first got out there, but I became acclimated and when my brother Zaak came out to visit at the end of the summer, he was struggling and I was going all right.”

A time of transition
Keith Havens and his wife, Sue, are planning to move to Tennessee once he retires as Albion’s swimming and diving coach and canoe club adviser at the end of the academic year. Zane said he appreciates the people he has been able to meet through his activities, and he hopes the current first-year students at Albion will be able to continue to show future students the joy of paddling down the Kalamazoo River, which runs along campus.

“We’re trying to get as many people involved in the canoe club, and if there is a good, strong student base that likes to paddle and knows how to paddle, when we leave people will continue to do it,” Havens said. “I think the outdoor program—canoeing and triathlon—is one of the great things Albion has to offer.”