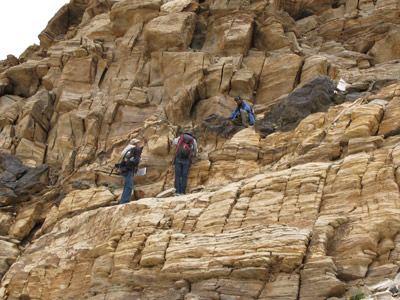 Geology professor Carrie Menold, seen here (right) in the Himalayas in 2010, collected rock samples that led to a three-year National Science Foundation grant she is currently working on with Cam Macris of IUPUI.There are stories in the rocks, and nothing makes Carrie Menold happier than figuring out the tale they’re trying to tell.

For Menold, associate professor and chair of geological sciences at Albion College and resident petrologist (rock expert), the story resides deep in the earth with rocks that range in age from a few million years old (mere babies in the geological world) to hundreds of millions of years old.

She is using her love of chemistry and math and geology to figure out some of the secrets that reside in the subduction zones of the earth where rocks crash together, often violently and sometimes leading to disastrous earthquakes and volcanoes.

And she’s working with not only a colleague but her best friend to provide science with answers to questions that science didn’t even know it was supposed to ask.

“This is definitely a pretty radical idea,” Menold says.

“It’s so exciting because it’s looking for something that people haven’t known to look for,” says Cam Macris, assistant professor of earth sciences at Indiana University-Purdue University Indianapolis. She is Menold's current research partner and a friend since their grad school days at UCLA. “And that’s because of Carrie’s previous work.”

The work involves the presence, scale and nature of fluids in deep portions of subduction zones that are known to be crucial in the generation of both earthquakes and magma. Subduction is when the edge of a tectonic plate moves downward into another plate. Sometimes the pressure of that movement is so great it snaps, creating an earthquake.

Menold and Macris want to study the fluids that are created and develop a new method for studying them.

The project was so important and intriguing that the National Science Foundation has awarded the two scientists a three-year, $340,000 grant (of which Menold was awarded just over $75,000) to study and report on the subject.

“Carrie was doing a lot fieldwork-based geology and I was doing more lab-based,” Macris says. “I was doing experiments and Carrie was out in the field collecting natural materials. There can be a lot of water at the great depths where these rocks form. She showed through her boron isotope work that there are great amounts of water at these depths. People weren’t looking for that. People thought it was at shallower depths.” 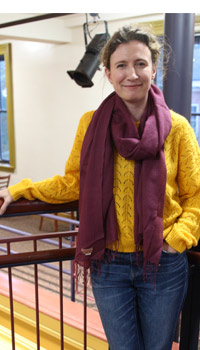 Carrie Menold joined the Albion College faculty in 2006.Menold realized the deep fluids were there by studying older rocks in northern Tibet while her new work, at around 15,000-to-20,000-foot elevation, in the Himalayas has younger rocks for her to compare and study. She has also been to northern Sweden to take samples of rocks she suspects will have the same fluid fingerprint.

Indeed, in many ways, Menold has been working toward this since she decided as an undergraduate at the University of Michigan that geology was the direction she wanted to focus.

“I was very late coming to geology,” she says. “I’ve always been interested in science and I was good in chemistry and math. But I wanted to study abroad and do outside fieldwork.”

Told that geology would offer her both options, she jumped at it.

The result has been three trips to China (Northern Tibet) and one each to India (Himalayas) and Sweden, where she gathered the rocks that are part of this NSF research project. Her journey to India came in 2010 when she had the opportunity, for the first time, to work in the Himalayas and collect samples that were the basis for the NSF grant.

Menold says she has no plans to travel for the NSF research, except to California, where she will do much of her lab work at Stanford University with another colleague, Martin Grove, a professor of geological sciences.

“We’ve collected a fair bit of data so far,” she says.

Menold and Macris will also use students in their research, and both are excited not only to finally work together but to find out where their studies lead.

“I want to find out how the Earth works,” Menold says.

“It’s always fun to work with your friends,” Macris adds. “It’s also really wonderful to work with another woman professor in the field who is doing the kind of science I like to do. We can support each other in this way. It’s women supporting women in science.”