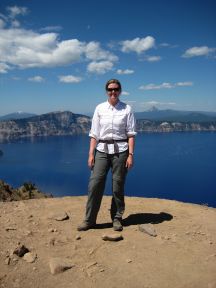 Meagan at Crater Lake in Summer 2010

On April 8, 2011, the National Science Foundation announced that Meagan Bosket '09 was awarded a  three-year NSF Graduate Fellowship to support her Ph.D. research at the University of Wisconsin, Madison.  Meagan will be finishing her M.S. degree in Geochemistry later this spring and will continue in pursuit of her PhD at Wisconsin.   Meagan's research is on tracing magma chamber evolution at Crater Lake, OR using uranium-series isotopes with Professor Clark Johnson.

As a student at Albion College, Meagan completed a B.A. in Geology.  During her junior year, she traveled to Antarctica with Professor Thom Wilch to study the Minna Bluff volcanic complex, and completed a senior honors thesis on the geology of a phreatomagmagmatic volcano at Minna Bluff.