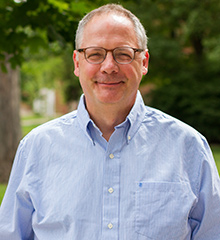 Albion College geology professor Thom Wilch has been invited to help direct the course of Antarctic research funded by the National Science Foundation (NSF). This week Wilch began work in Arlington, Virginia, as NSF program director of Antarctic Earth Science in the Division of Polar Programs.

He will serve at NSF as a participant in the Intergovernmental Personnel Act Program (IPA), in which scientists from universities fill rotator management positions at NSF. The current position is for one year and may be renewed for a second year. NSF is one of the primary federal funding agencies for scientific research in the U.S. and is the chief funding agency of research in Antarctica.

"I am excited about the opportunity and challenge of working at NSF, facilitating geologic research in Antarctica," said Wilch. "The Antarctic Earth Science program is incredibly diverse in terms of scientific scope, with projects ranging from understanding the deep structure and tectonics of the earth, to projects reconstructing the evolution of ancient life, to projects looking at the sensitivity of the ice sheet-ocean system to past and future climate change."

As program director, Wilch will manage the portfolio of currently funded research projects and oversee the peer-review process for new grant proposals. Program directors use peer review to make funding decisions for upcoming projects. Wilch will also work closely with logistics personnel at NSF to make sure that researchers are well supported to conduct field work in Antarctica. Now in the middle of the review cycle, the next round of funding decisions will be made in the fall for projects that begin in 2016.

IPA program director positions at NSF are offered on a temporary basis, ensuring that the country's best and most active researchers help lead the direction of scientific research. Wilch specializes in glacial geology, physical volcanology and paleoclimate history. He has made nine research expeditions to Antarctica since the late 1980s, including two trips with Albion College student research assistants. He holds an M.S. in Quaternary Studies from the University of Maine, Orono, and a Ph.D. in Geology from the New Mexico Institute of Mining and Technology. Wilch served as department chair in the 2014-2015 academic year and is the Herbert H. & Grace A. Dow Trustees' Professor in the Sciences.

"There are fundamental questions about our future that will be answered in Antarctica," Wilch said. "At the center of the Southern Hemisphere, this continent and its ice sheets play a critical role in the global climate system, both in the past and today. These questions about the future require understanding the nature, pace and magnitude of past changes. The high quality of past and ongoing scientific research in Antarctica is really encouraging, and I am very happy to help facilitate this research."