Over the decades, the College’s youngest science department grows as a family 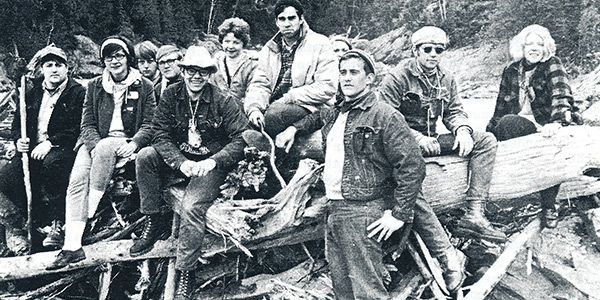 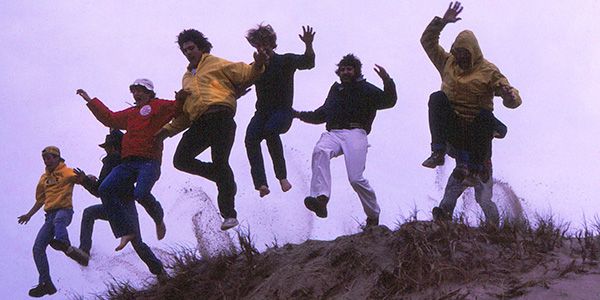 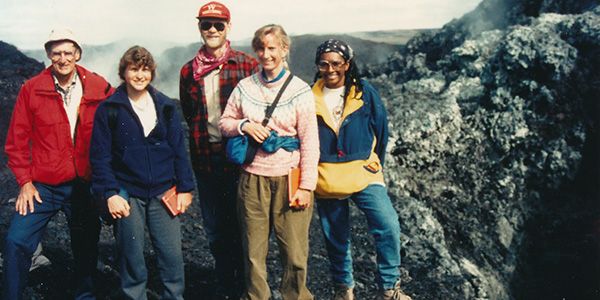 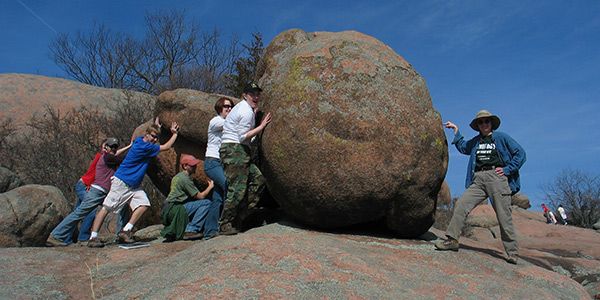 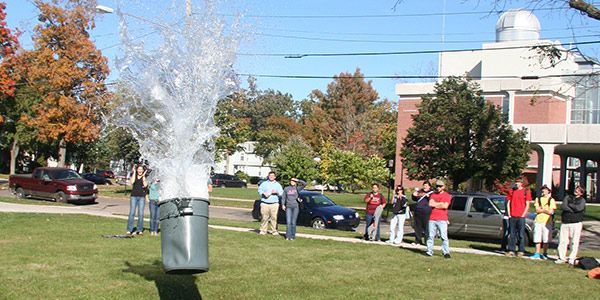 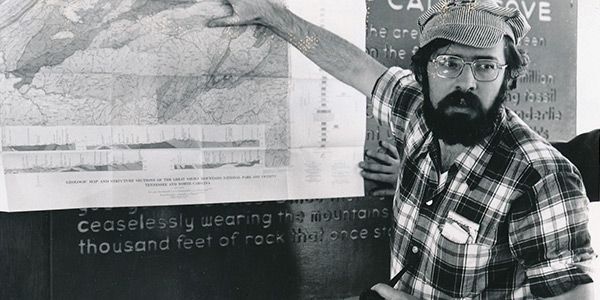 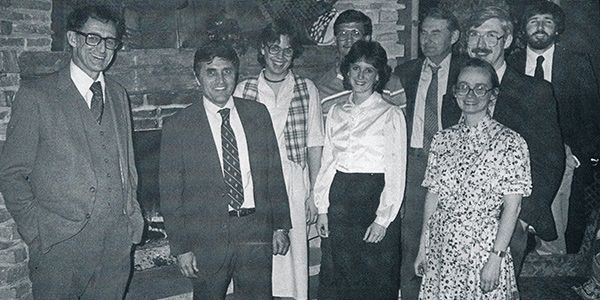 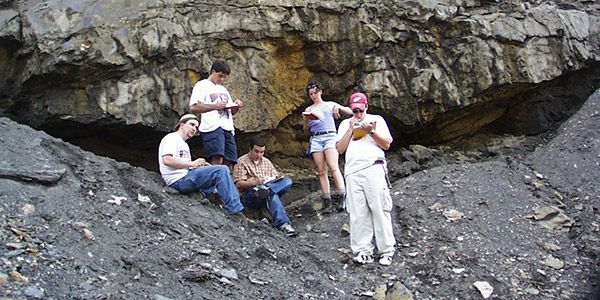 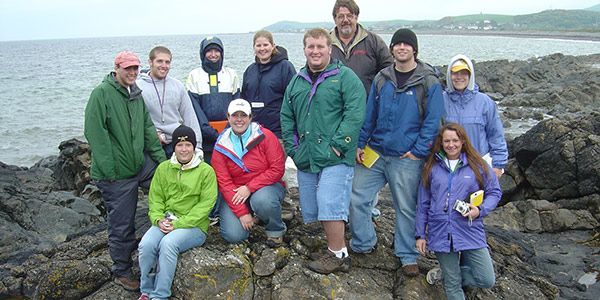 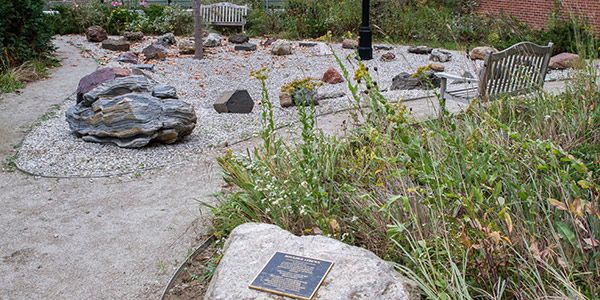 Rock Strewn at the Science Complex, featuring specimens from multiple geological eras, given to the College by renowned geologist J Harlen Bretz, class of 1905. 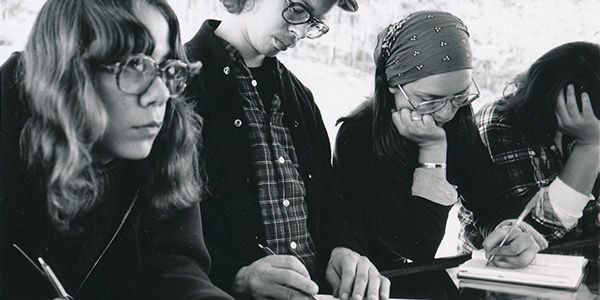 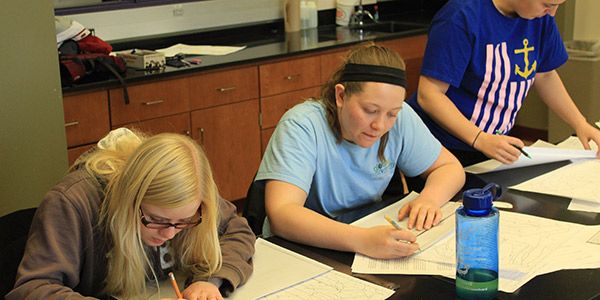 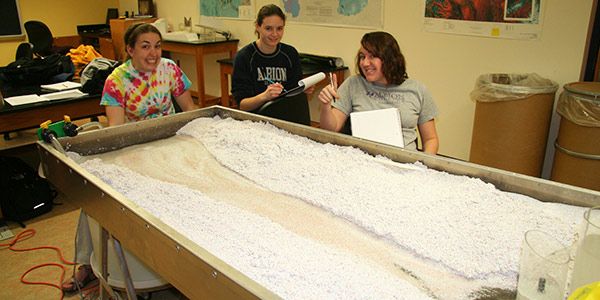 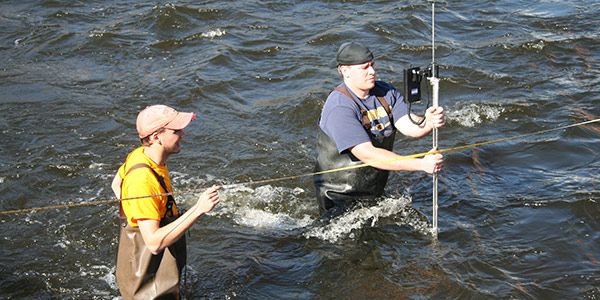 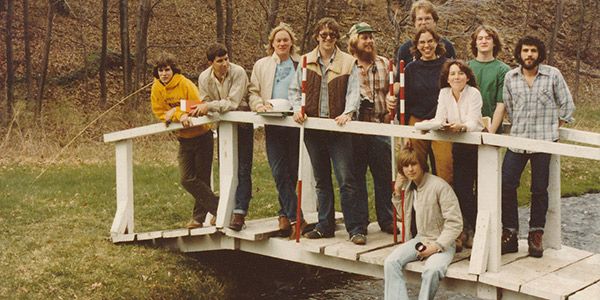 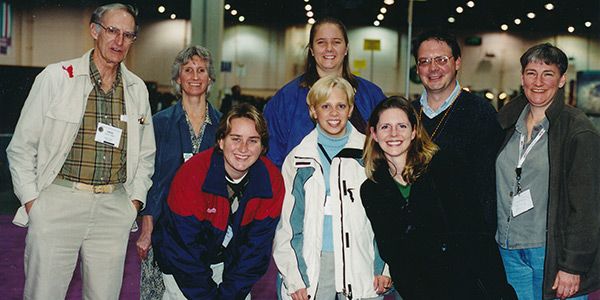 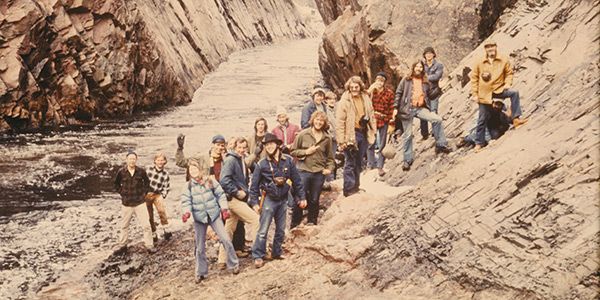 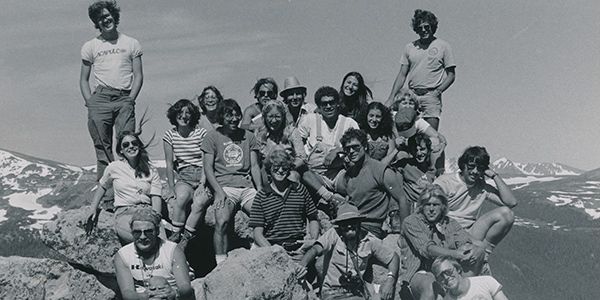 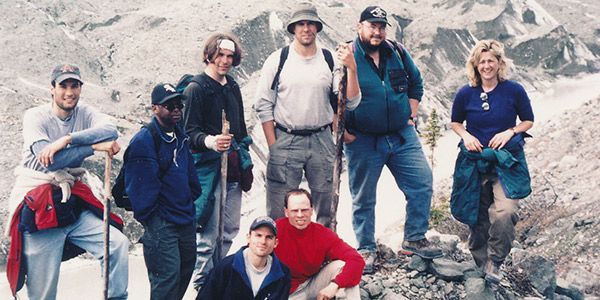 Albion students during the Alaska regional, 1998. 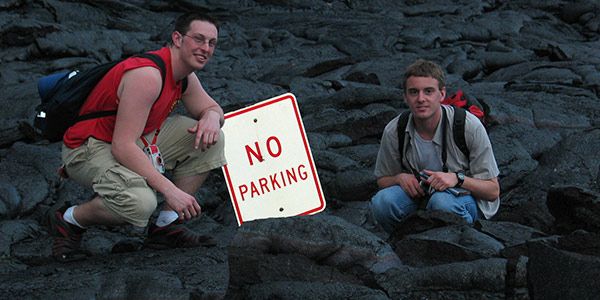 Lava flow from eruption of Kilauea Crater, island of Hawaii, 2003. 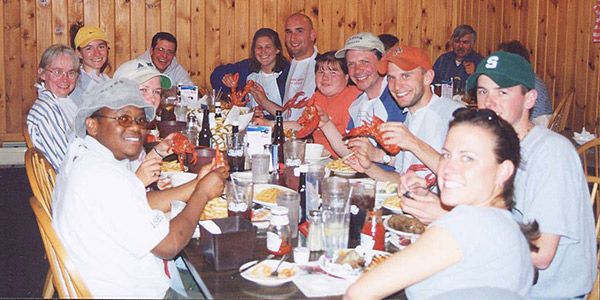 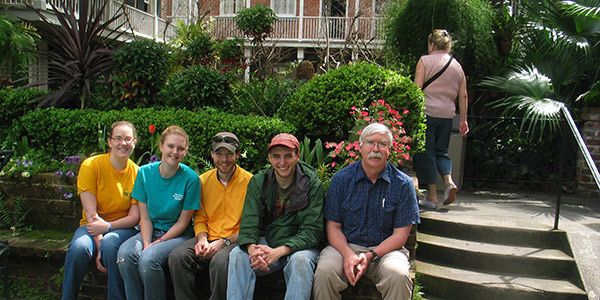 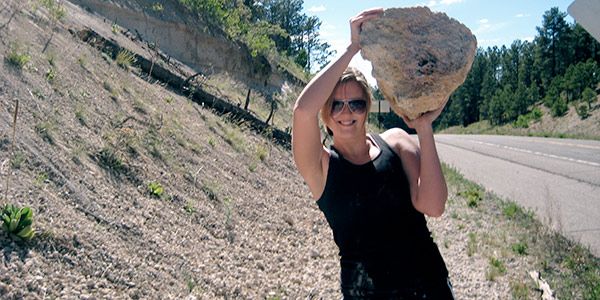 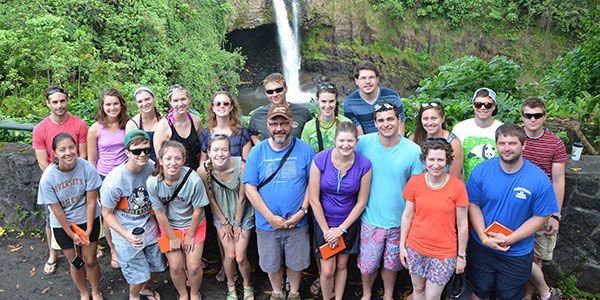 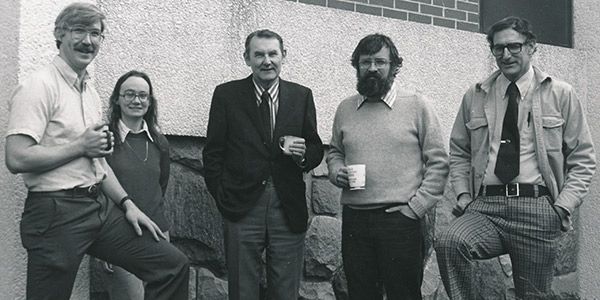 "Doctor Louis Norris, president at the time, had an interest in geology and could see that geology's interdisciplinary nature would be an asset to the College's liberal arts curriculum."

The time to which Larry Taylor refers is the early 1960s. In 1964, Albion College officially launched its Geological Sciences program.

The faculty was a one-man expedition: Taylor.

"It was a good time to establish a geology department because enrollment was expanding and a Ford Foundation grant was obtained to aid in expanding College facilities," says Taylor, a professor emeritus since 1998 who credits former Biology Department Chair Bill Gilbert for his oversight of the new program's earliest days. "In addition, a National Science Foundation grant was later obtained to support the geology program."

With support came growth: two more faculty positions were added by the end of the '60s, and through the ensuing decades and scores of regional trips and field camps grew a dedicated and successful alumni base that today stays well connected to Albion through the department's popular annual newsletter.

Below, Taylor and professors Bill Bartels and Thom Wilch—at Albion since 1986 and 1998, respectively—share some of their memories from over the years.

What department highlights stand out the most?

Taylor: Albion College honoring our geology alumni with Distinguished Alumni Awards (J Harlen Bretz, class of 1905; Julie Brigham-Grette, '77; Walt Pomeroy, '70; Paul Dixon, '83); the accomplishments of the geology staff, who received teaching awards, endowed professorships, and significant funding over many years; our undergrads winning Best Student Poster awards at Geological Society of America national meetings; the feedback from many of our alumni as visiting lecturers; the visit of Apollo 17 astronaut Harrison Schmitt in 1983.

Bartels: Our continuing ability to produce geology graduates of the highest caliber while maintaining a large and diverse general education program is our department’s main highlight. Each year, our students go on to the best graduate schools and get jobs quickly with top firms.

Wilch: The department has incredibly successful and loyal alumni. We have been able to hire great faculty who are really committed to the department's mission. ... The faculty [also] live in and very near Albion and are committed to the full liberal arts experience for students and to the community of Albion.

More personally, what is your most memorable experience in the department?

Bartels: The Regional Trips (GEOL 210) have always been great and memorable experiences. I feel most of our students would say the same thing. Whether it was the British Isles with Russ Clark, the Appalachians with Russ or Mick McRivette and Carrie Menold, or the Southwest with Thom Wilch (and our young children), they all stand out as special experiences for me and our students.

Wilch: The reason we have such great relationships with our students is that we work, travel, and experience the natural world with them. This often involves lots of time together in vans and camping, sometimes in rather nasty conditions—but always in rather spectacular places—Death Valley, the Cascades volcanoes, New Mexico, the coast of Maine, and Hawaii.

Taylor: One trip, in particular, in 1970 to Agawa Bay, Lake Superior, included some of our first geology majors, like Walt Pomeroy and staff members like Bill Workman, Jack Parker, and me. At outcrops and beaches and camp sites we exchanged knowledge, puns, and humorous bashings that only enhanced our respect for one another. Our evenings around camp fires, outdoor cooking, and tenting in the snow and rain brought staff and students together in a positive way.

Albion had alumni who were very successful and notable geologists well before there was a geology department. How do they fit into the department’s story?

Taylor: Their success certainly helped in establishing the department many years after they graduated. Most notable was Bretz, who donated his journals, rocks and minerals, memoirs, and other significant documents to the College, in addition to significant monetary donations.

Wilch: Another notable geologist alum who had minimal training in geology at Albion was Robert E. Horton, class of 1897. Horton majored in science, which included some geology, and went on to be one of the most influential quantitative hydrologists of all time. He is typically referred to as the father of hydrology.

Talk about the department’s evolution over the last decade.

Wilch: The department has grown in size both in numbers of faculty and students. As the world changes, our curriculum has evolved. One example of this is our very strong program in Geographic Information Systems (GIS) and Remote Sensing. We were far ahead of the pack in terms of developing a GIS program at Albion and continue to be a leader among liberal arts colleges.

Bartels: We also feel that the expanding realization that many of humankind’s greatest challenges over the next century are deeply rooted in the earth sciences has contributed to this growth. Whether it is changing climate, the availability of clean water, or the search for natural resources, geology is at the heart of the solutions that must be found to sustain human life on our planet in the long term.

Let’s close by going much further back. How would a geologist describe the makeup of The Rock on the quad?

Wilch: Like most everything else on the southern Michigan landscape, it’s Canadian. I suspect under all that paint is a pretty good-sized granite boulder from Ontario.

Taylor: The Rock is probably the size of a basketball! (That’s a joke about the many coats of paint covering it.) Actually it is a glacial erratic probably transported by ice sheets from Ontario and is most likely a metamorphic rock or igneous rock.

Bartels: The Rock’s flat face is a glacial facet, indicating it was dragged here by a glacier from Canada. It is most likely a Superior Province granite and would therefore be between 2.4 and 2.7 billion years old. It was probably delivered to campus about 15 thousand years ago. If we were allowed to remove all that paint, further details could be provided. Is “unpainting” The Rock allowed?