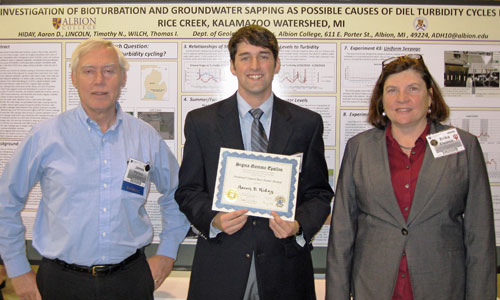 "Winning the award was awesome," said Hiday, a geology major from Burlington, Michigan. While noting that the competition was close, he considered some of the advantages he felt he had. "The judges said I had a poster that was easy to follow without being presented, although I also present it very well," he explained. "I also had created one of the lab experiments myself, and [geology professor and adviser] Tim Lincoln and I created a unique way of running a different in-lab experiment that was very complex."

"Two best poster awards are given at the student poster session, and it's quite an honor for Aaron to have won them both," said Department of Geological Sciences chair Thom Wilch, one of Hiday's poster co-authors. "Aaron was quizzed for a long time by several judges and did a great job explaining his research."

"This is the fourth time in the past 10 years that Albion students have won best poster awards at the GSA annual meeting," Wilch added.

Hiday's poster was based on research funded by Albion's Foundation for Undergraduate Research, Scholarship and Creative Activity (FURSCA). The project recorded and analyzed variations in water flow through Rice Creek, a stream that runs near Albion's campus (see photos from his project).