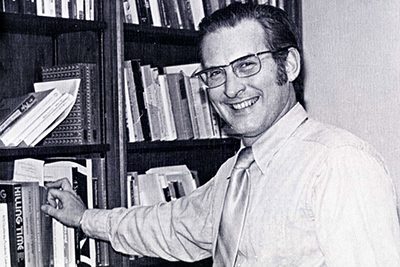 Jim Cook was chair of the English Department at the time of this 1973 Albionian yearbook photo.Professor emeritus of English James Wyatt Cook passed away April 2, 2021. He once described his 38-year tenure at Albion College as his dream job of reading, writing and talking about books.

A scholar of medieval and Renaissance literature, Cook translated hundreds of works, many for the first time into English, with a particular focus on Italian poets, authors and playwrights. One of these, a play by 15th-century nun Antonia Pulci, was performed by Albion College students at the International Society for the Study of Medieval Drama in Odense, Denmark, in 1998. Theatre professor emeritus Tom Oosting notes that Albion was the only American college invited to perform that year, and that many performances were staged by professional ensembles.

Oosting further explains that Cook’s translations reveal the feminist nature of Pulci’s work—a perspective that likely contributed to her obscurity before Cook started his translations. “These plays were written for an all-female cast and an all-female audience. They discuss the trials and tribulations of being a woman in 15th-century Italian society and the trials of being a nun, especially for many young women who didn’t choose that life for themselves,” Oosting says. “We were both pleased that his work was stageable and added this feminist perspective to Renassance scholarship.”

“I was able to recite the opening passage of Canterbury Tales in Middle English. That made Jim beam, because he realized we were kindred spirits,” says Carol Gaffke Raisky, ’95, recalling her first day in British Literature, the first of many courses she had with Cook.

Raisky notes that Cook’s teaching and scholarship often reflected this passion for literature as both written and spoken art. “You could just see his love of the language, the way he made the musicality come through,” said Raisky, noting that along with reading to his classes in Italian and Middle English, Cook was also able to recite Beowulf in its original Anglo-Saxon.

“Language is a living being and it grows and thrives through being spoken, heard, translated and interpreted,” Raisky added. “Jim brought it to life.”

Cook also had a strong interest in the work of living writers and scholars. For many years he worked with the Great Lakes Colleges Association New Writers/Poets Awards, and he twice directed the GLCA Newberry Library semester. He also created and directed the GLCA off-campus program in Venice, Italy.

Cook’s on-campus legacy reflects his concern for students at all levels. He helped found the Developing Skills Center, Albion’s first formal program open to any student in need of academic assistance. He also founded In the Forest, a literary and arts publication that eventually became today’s Albion Review.

Irene “Renee” Pollock Fleming, ’68, recalls turning to her favorite professor for advice when her sorority’s national leadership would not allow the Albion chapter to admit an African-American student. (A story about this time can be found in the Fall-Winter 2017-18 edition of Io Triumphe! magazine.)

“Jim was understanding and supportive, and he affirmed the stand our group had taken and the work we had done. He made it clear, however, that this was a serious problem and he advised me to go directly to the administration,” Fleming recalled. “The College—which had firm anti-discrimination policies—resolved the issue, and I have always appreciated Jim’s kindness to me in that difficult situation and his excellent advice.”

“Jim Cook picked me up when I was at my lowest point in life and put me back together again,” says Kirsten Hinsdale, ’69, who says she was a struggling young mother when she became the English Department’s part-time secretary. Hinsdale recalls that Cook encouraged her to take a professional position with the Michigan Department of Social Services, then hired her himself to work with Validated Instruction Associates, a company he founded with English Department colleagues Paul Loukides and Jay Zink. Hinsdale eventually owned 49% of VIA and conducted social science research, including multiple projects focused on career enhancement for military women.

“Jim gave me a lifelong confidence that I could—and should—work for the betterment of others, and on a fairly large scale,” Hinsdale said. “I owe so much of what I have accomplished in this life to Jim Cook, who launched my career and set me in orbit. My heart is filled with gratitude. I only hope I have done him proud.” 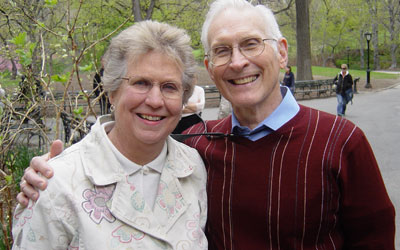 Jim with Barbara, his wife of more than 60 years, in a 2007 photo.At the time of his retirement in 2000, Cook held the Langbo-Trustees Distinguished Professorship and fellowships with The Pontifical Institute for Medieval Studies and the University of Calgary Centre for Reformation and Renaissance Studies. In 2009, he became the 12th recipient of an Albion College Meritorious Service Award; Cook actually began his undergraduate study at Albion before receiving his B.A., and later his Ph.D., from Wayne State University. He received his M.A. from the University of Michigan, and during that 1950s decade he also served the U.S. Army as a counterintelligence agent.

Jim and his middle school sweetheart, Barbara, were married for more than 60 years before her death in 2020, and both spent decades performing with the Albion College Symphony Orchestra. They are survived by three children including Kathleen Cook Dauphinais, '84, and six grandchildren.