From teaching in South Korea to analyzing energy policy in Boston, “the education I got here...helped me get to where I wanted to go.”

“He was so captivating. He was kind and good at his job,” said Kimball in a recent interview. “He immediately captured everyone. People really felt a warm attachment.” 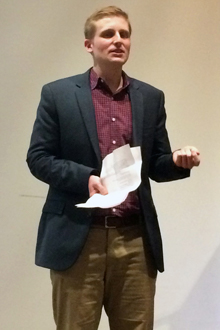 Andrew Kimball, ’09, currently works for the Massachusetts Executive Office of Energy and Environmental Affairs. That attachment was clearly evident Monday when Kimball visited campus for the College’s annual Charles Crupi Memorial Poetry Celebration, which recognizes winners in an annual poetry contest for Michigan high school students. It also features an induction of a teacher into the Charles Crupi Society for Excellence in the Teaching of Poetry, this year Scott Beal of Ann Arbor.

The event also provides the opportunity to honor Crupi, who passed away in 2010 not long after his retirement following 35 years of making Shakespeare and Renaissance literature come alive for students. Anne Starr, '03, joined Kimball in reminiscing about a beloved professor.

“I have fond memories of Albion and the lessons I learned from the English Department,” said Kimball. “The education I got here was important as a standard maker. It helped get me where I wanted to go.”

During his senior year, Kimball spent the fall term as a reporter for the Shanghai Business Review, a British magazine, researching and writing features on finance and the many sectors undergoing rapid economic development within China.

The U.S. economy was not in good shape in 2009—Kimball remembers the Goodwill store in Albion closing. He thought about going to law school and also thought about going into journalism. A “strong pull to travel” pointed Kimball in the direction he ended up taking, he said.

He spent nearly seven years in South Korea “doing a lot of different teaching projects,” he said. Kimball was a lecturer at the Chuncheon National University of Education and eventually co-founded YiMina Language Academy in Namyangju, a school that teaches English as a second language.

Kimball returned to the United States in 2016 and at Tufts University pursued his master of arts degree in law and diplomacy, international environment and resource policy, and international business relations. And who did he find in class? One of his Albion classmates—Will Medick, ’08—was enrolled in the same program.

“That was so cool,” Kimball said with a smile.

Since receiving his master’s degree, Kimball has been employed as an energy policy analyst for the Massachusetts Executive Office of Energy and Environmental Affairs. He realizes the difference between his initial career choice as a teacher and the choice he made to join a government entity.

“As opposed as these disciplines may seem, the truth is the tools that Charles and this department passed on—those were the very tools that helped me understand that fulfillment for me would have to come from working on the front lines of very big and very challenging human problems,” he said during his Crupi Celebration remarks.