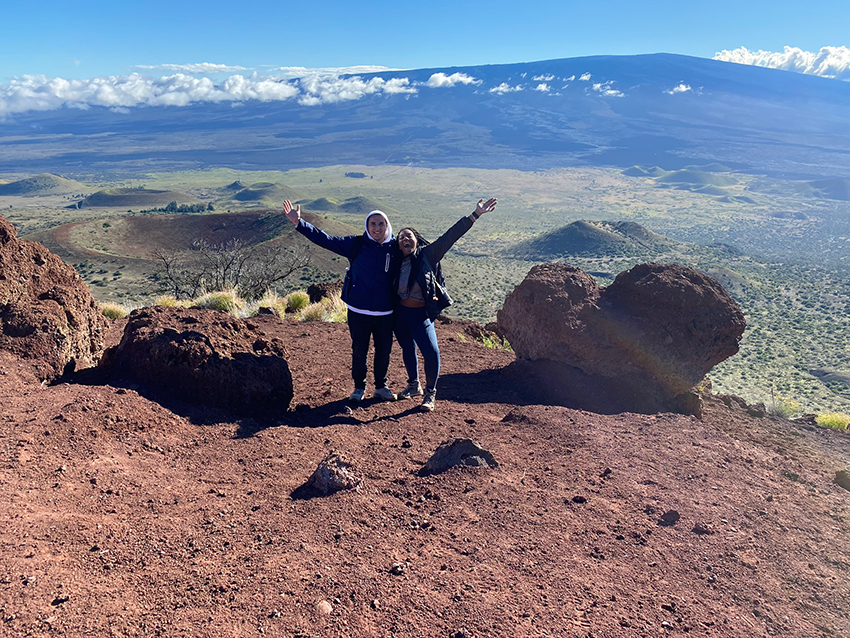 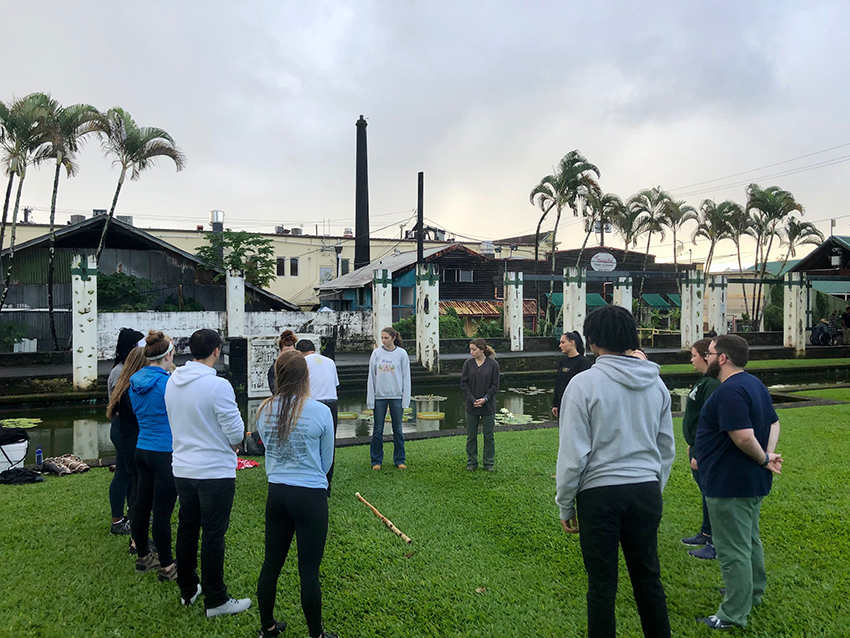 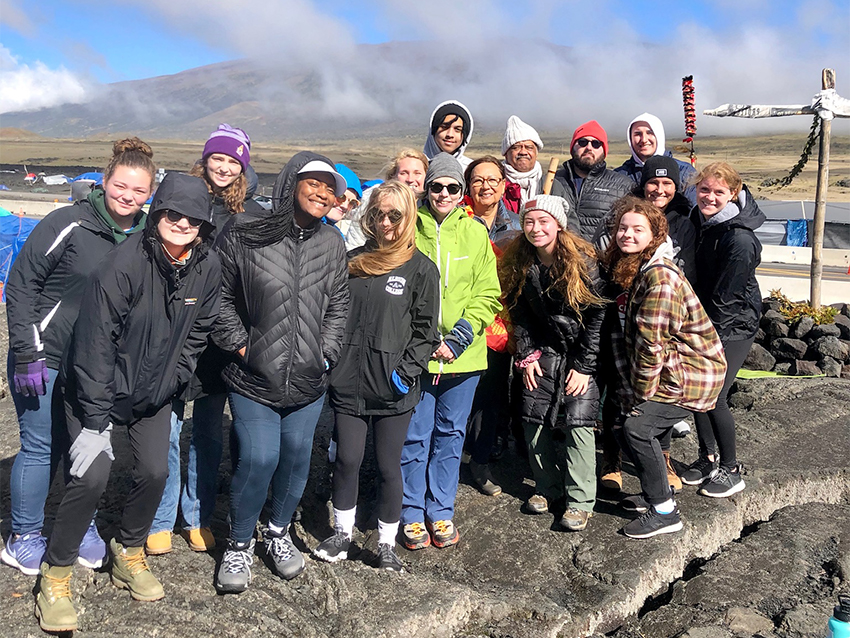 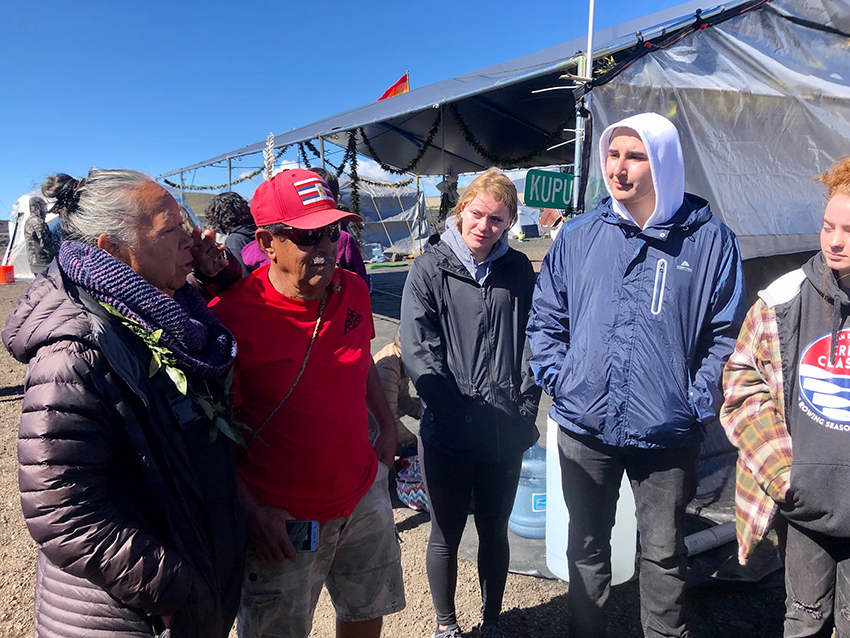 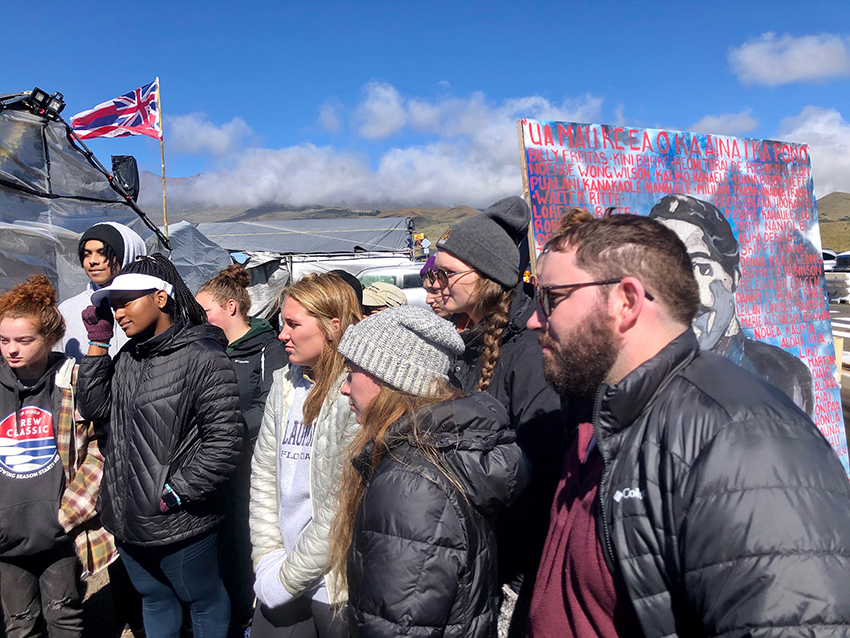 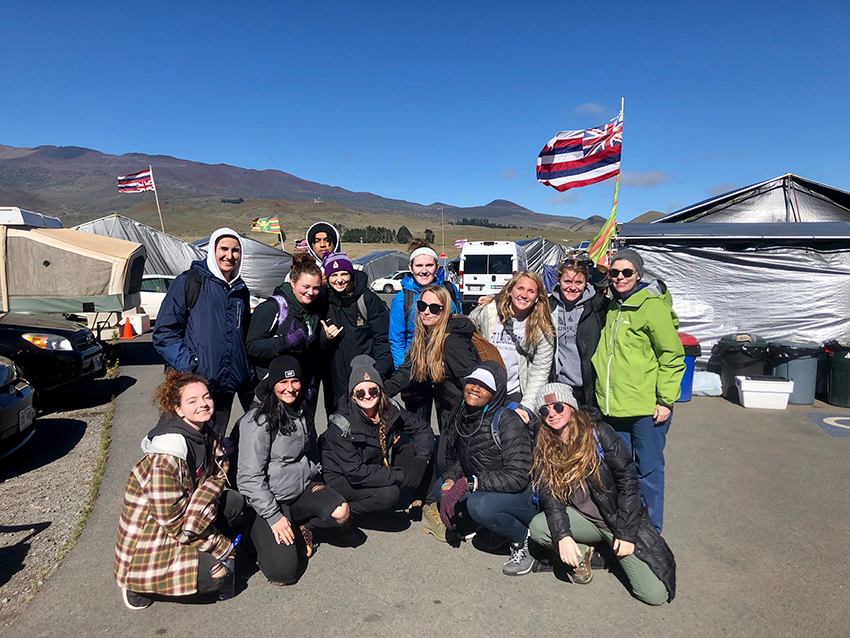 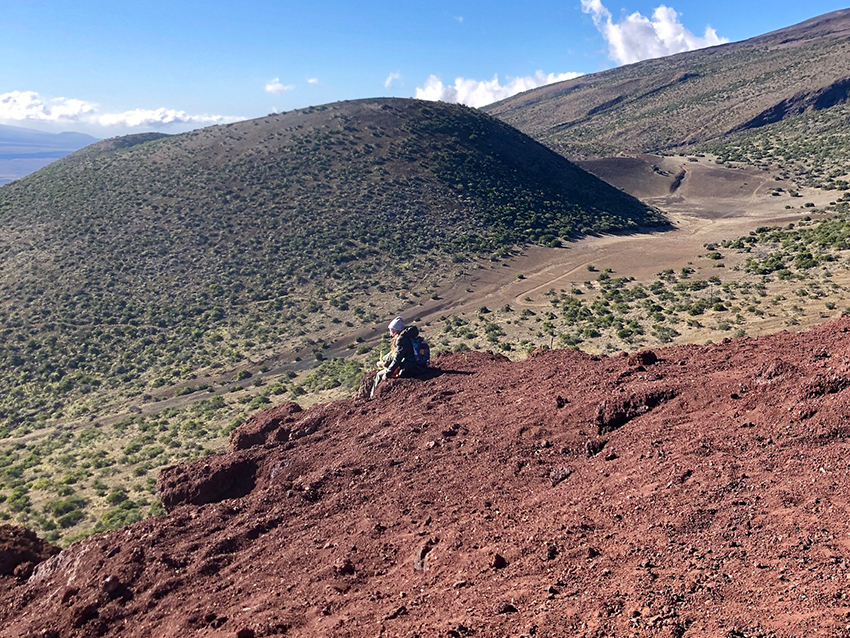 Mauka & Makai: Place and Education in Hawaiʻi—one of the nearly three dozen First-Year Seminars offered last fall at Albion College—traveled to the Big Island of Hawaiʻi on January 2-9. The course, taught for the last few years by professor of education Suellyn Henke, focuses on fostering a respectful, open disposition toward diverse and multiple points of view through study of postcolonial and place-based educational perspectives. The title of the course refers to a way to communicate sense of direction on an island. Put simply, mauka is toward the mountain and makai is toward the ocean.

This year's trip brought the class a unique social/cultural/political experience, through their visit to the ongoing peaceful protest at the base of Mauna Kea. The class met with kiaʻi (protectors) who taught them the protocols necessary to present hoʻokupu (gift, establishing of relationship) carried from Albion specifically for the elders and ancestors at Mauna Kea.

The tallest mountain in the world when measured from its underwater base, Mauna Kea is revered as a sacred place by native Hawaiian cultural practitioners. After many years of legal disputes, a Thirty Meter Telescope was given approval this summer to become the 14th, and largest, telescope built on the mountain. On July 17, 2019, 38 kupuna (elders) were arrested, without resistance, for blocking the Summit Access Road. This protest became an encampment that has garnered international attention about indigenous rights, environmental impact and sustainable development.

Two weeks prior to the class visit, the governor of Hawaiʻi announced that there were no immediate plans to construct the telescope, law enforcement was withdrawn and a temporary stand-down was negotiated, in which the kupuna's tent was moved off of the road. Many of the kiaʻi were able to return to their families and daily life, while still retaining ceremonies and a strong presence and readiness at the mountain.

Before visiting Mauna Kea, the Albion group was led in a pikai, a traditional Hawaiian ceremony of cleansing to help set positive intentions and to become aware of natural signs before entering a sacred place. The class was told that this was the season of the Hawaiian god Lono, a season of peace, relaxation and abundance. Students learned appropriate protocols to demonstrate respect when visiting the ahu (stone altar), as well as how to present themselves to the Royal Order of Kamehameha and kupuna (elders and ancestors) at the noon aha (meeting and introduction of visitors), and the spiritual practice of greeting with a honi, which emphasizes connection and exchange of breath.

Students were able to participate in a class taught by Dr. Pualani Kanakaʻole Kanehele at the "Puʻuhuluhulu University" (name given for the cultural courses offered to vistors at the protest encampment). Back in Albion, the students had seen Kanehele in the film Holo Mai Pele, which interprets the story of the volcano goddess, Pele, and her sister Hiʻiaka, and provides geologic insight into the formation of the Hawaiian islands. "It was a surreal and special feeling," Henke explained, "to be at the base of Mauna Kea, underneath an open-air tarp, with 'Aunty Pua' in person, as she instructed groups in the mele (chant), Na Mele Kahea."

After Albion’s group was presented at the noon aha, elders Dr. Noe Noe Wong-Wilson and Kini Burke spent time talking and sharing with the students about the significance of Mauna Kea, and the beginnings of the movement to protect the mauna from further development. Wong-Wilson emphasized that there has been a strong Hawaiian tradition of studying the stars and the universe, and this movement was not anti-science.

Kapu aloha, the Hawaiian philosophy at the heart of this movement, was also shared. The action of protecting the mountain is intentional in its embrace of love for humanity, the planet and diverse points of view. Kapu aloha sets a tone of reverence, integrity and respect, kindness, love and empathy for all, especially groups and individuals with beliefs and actions that are oppositional at the core. The concept of kapu aloha was introduced during the semester, but became real for students at the base of the mountain, Henke said.

As part of the hoʻokupu, Henke brought gifts of place from Albion, which included water collected from Albion's Victory Park spring. When Henke introduced the class at the noon aha, she emphasized the Great Lakes and the North and South branches of the Kalamazoo River as a way of situating Albion. Henke was later surprised when several protectors expressed concern for Michigan's Flint water crisis and Enbridge oil spill, issues that Henke hadn't mentioned. It was, she said, "yet another deep lesson, that when it comes to the environment, we are all connected."

Henke and the students would like to acknowledge the generosity of those who made this visit possible. The William Atwell Brown, Jr. and Mary Brown Vacin First-Year Experience (FYE) which enabled the whole class to visit Hawaiʻi. Traveling together enhanced learning and sense of community. The Office of the Registrar, the Center for International Education, and the Fritz Shurmur Center for Teacher Development also kindly provided support in planning and preparation for the trip. Co-chaperone Chris Berry, the College's director of risk prevention and intervention in the Division of Student Development, supported student learning throughout the trip, and First-Year Experience Peer Mentor Rachel Stander, '21, served as a role model and gave support throughout the semester as well as during the visit to Hawaiʻi. Finally, words cannot fully express the gratitude the class felt toward Kumu Nani Pai for arranging the visit to Mauna Kea, and Dr. Alice Kawakami and Kumu Moses Kahoʻokele Crabbe for their patience and gracious guidance.