Albion to Screen Documentary on State of Public Education

For Sarah Mondale, the subject of public education has always been close to her heart.

Then came the 2016 election, and the documentary on the topic that she had worked on for five years, and which had become a labor of love, now became something even more. 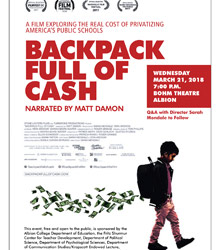 “The issue was very important to us,” Mondale said from her home in Suffern, New York. “It didn’t become such a timely issue until the presidential election. And then when Betsy DeVos, being such a huge supporter of school choice, became secretary of education, the issue got on people's radar all of a sudden. We had no idea about [the election of Donald Trump as president] when we started this. It took so long to get the film funded and edited. I wanted to get it done sooner but, in some ways, it was a good thing it was delayed. Many more people are now involved and concerned. This has been an incredible adventure for us.”

Mondale’s documentary, Backpack Full of Cash, released in October 2016, has found a new urgency as it continues to be shown from one end of the country to the other. That includes an appearance Wednesday, March 21, at 7 p.m. at Albion’s downtown Bohm Theatre, where Mondale will be on hand to present it. She will also answer audience questions after the screening.

Additionally, Mondale will speak with Albion College students in several classes, including Pedagogy–Elementary Social Sciences, Processes of Learning and Teaching, and Educational Psychology.

Albion is hosting the event thanks to the collaboration of several College entities, including the Fritz Shurmur Center for Teacher Development, the departments of Education, Anthropology and Sociology, Communication Studies (Kropscott Endowed Lecture), Psychological Science and Political Science, and the Gerald R. Ford Institute for Leadership in Public Policy and Service. It was also aided by the Michigan Humanities Council.

Jason Moritz, certification officer for the Education Department, and Karen Hoaglin, liaison for the Shurmur Center, took the lead in contacting Mondale to have the film screened here.

The documentary made the rounds as a film-festival fixture from Philadelphia to Seattle, and it has since been shown in every part of the U.S. as well as in Canada, South Africa, New Zealand and other countries.

“We’ve been hearing from colleges, including some that train teachers, but a lot of parents, community and grassroots groups as well,” Mondale said. “We decided to distribute it ourselves, and because of the subject matter and need for it, we decided to go as a grassroots project. We’ve gone around the country showing the film because of the interest. We had no idea the interest level we’d receive.”

Professor of education and department chair Kyle Shanton felt it was an important message to bring to town.

“This film is about equity,” he said. “It’s about public education in particular, and we think that’s a conversation that matters. Many Albion graduates go on to become public school teachers and administrators. Public education has been at the core of this nation’s effort toward democracy for a long, long time.”

Indeed, this film marks something of a documentary trilogy in Albion about various aspects of public education in America.

The first film, Medora, was shown here in 2016 and chronicled a dying small town in Indiana and the trials of the high school basketball team. The second, Night School, was shown last spring and focused on residents in Indianapolis going back to school to find a new start. Both of those films were directed by Andrew Cohn.

Backpack Full of Cash looks at the difficult questions of public education vs. charter schools and schools of choice.

“They’re about access to equitable education,” said Shanton, describing those questions. “And there have been struggles along the way, and this is a way to understand the struggles in public education and what makes it vulnerable. And it’s significant for democracy. That’s at the heart of liberal arts. This will bring together people from many different walks of life, and we’re hoping for a large and varied crowd. It’s definitely about educating the public, to have access to information and be critical thinkers. And we want people to ask, why does it matter for a democratic society? Why does it matter for Albion, Marshall, Calhoun County and the state of Michigan?”

Even the film’s title is a term used purposely by the filmmakers after a quote in the film from Jeanne Allen, founder and CEO of the Center for Education Reform, which espouses letting parents use their child’s share of public education dollars, their so-called “backpack full of cash” to attend the school of their choice—public, private, religious or online.

“We’ve seen that term used by people on both sides of the debate,” said Mondale, whose parents were both teachers and who was a teacher herself on and off for eight years. “We weren’t sure of a title in the beginning and then Jeanne used it. So we said, ‘Well, that encapsulates what the choice side is envisioning.’”

Mondale insists the film is not an attack on charter schools but an opportunity to show both sides of the contentious debate.

“We’re not saying charter schools are bad,” she said. “It was a good idea as originally started, but it’s turned into something else. It’s that something else that we have a problem with. Charters on the whole don’t perform any better than a public school. Charter schools educate different students, they don’t educate as many kids in extreme poverty or kids with severe disabilities or [English as a Second Language] kids. It’s not a level playing field. Of course, every parent can choose what they think is best for their child. And in wealthy communities, they don’t have charters, but well-funded public schools. Why shouldn’t every kid have access to that?”

Mondale hopes the film will spark dialogue about the pros and cons of school choice, voucher programs, charter schools and, ultimately, the place of public education in America.

“It’s designed as a discussion starter,” she said. “People won’t agree and that’s fine. We just want people to see the other side of the argument, about how school choice is impacting public schools.”

A reception for Sarah Mondale will be held Wednesday, March 21 from 5 to 6:30 p.m. at the Ludington Center, 101 N. Superior St. The documentary will be shown at 7 p.m. in the Bohm Theatre, 201 S. Superior St.; a question-and-answer session with Mondale will follow the screening. Both events are free and open to the public.