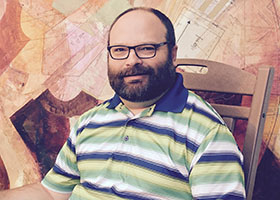 “The great thing about having a teaching certificate is you can take it anywhere,” says Moritz. “That’s what I tell the students here. You can go wherever you want to go.”If you look closely, you can see it. Jason Moritz certainly has.

There it is, among the dozens of names that scroll by in the closing credits of the fifth-anniversary DVD of the 2000 Academy Award-winning movie Gladiator.

“I wasn’t in the original movie credits, but for the anniversary edition I pulled some images of costumes and I ended up with a ‘Special Thanks,’” Moritz says with a smile. “That’s my only film credit.”

That was long ago and far away for Moritz, who has been at Albion College now for 10 years as the Education Department’s certification officer, the school’s liaison between the state of Michigan and the College as students seek teaching certification upon graduation.

His eclectic background has included teaching middle school seventh-graders and community-college adults, reading poetry over an intercom to offenders at a California youth facility, and spending six years in Hollywood—working first for DreamWorks SKG and then Universal Studios as an animation film and tape archivist.

“I wasn’t an actor or a director, but I had access to all these people all over the world who were very talented,” he says. “Mainly it was a nice phase. It was six or seven years I really loved.”

Moritz’s journey from here to there and back again began during spring break in 1996 when he was going to graduate school at Iowa. A friend suggested they go out to Los Angeles during the time off, and it proved to be an experience to remember for Moritz.

So after gaining his teaching certificate two years later, he struck off for Southern California to teach.

“The great thing about having a teaching certificate is you can take it anywhere,” he says. “That’s what I tell the students here. You can go wherever you want to go.”

After teaching middle school and community college for two years, he decided to get another master’s, this time in library sciences from UCLA. And as part of earning his degree, he did two internships—one as a substitute librarian at the youth facility in Downey, Calif., where he would read over the intercom to the residents on everything from poetry to articles in Sports Illustrated.

“Some of them would scream, ‘Who are you?’ because they didn’t recognize my voice,” Moritz says. “It was surreal.”

His other internship took him to Hollywood with DreamWorks, the studio formed by entertainment industry heavyweights Steven Spielberg, Jeffrey Katzenberg and David Geffen.

“It was an eye-opener,” says Moritz, who worked as an archivist/librarian storing artwork that would come in from artists around the world while also retrieving work that various artists and animators would need. “It was right at that transition from hand-drawn work to digital.”

It was work that Moritz enjoyed as he saw many types of projects, some of which were never made, but all of which impressed him with their artistic skill.

“My mother is an artist so I grew up with it,” he says. “They were beautiful and we felt a duty to preserve them.” 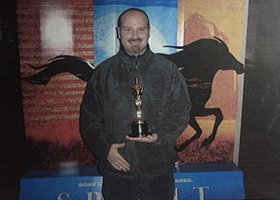 Moritz, a DreamWorks SKG employee in the early 2000s, with the Best Animated Feature Oscar won by Shrek.He was at the studio when the animated movie Shrek was made and, along with seeing his name on the Gladiator credit, had his picture taken with the Academy Award that Shrek won for Best Animated Feature in 2002.

He also helped create a miniature Oscar for director Martin Scorsese in 2004, a gesture from Katzenberg at a time when it seemed the long-celebrated director would never win an Oscar of his own (he did three years later).

Moritz worked at the studio part-time as a grad student and then was hired full-time and continued there when DreamWorks evolved into Universal. He remained there until 2007, when he had an opportunity to move to Michigan; his new wife, Melanie, a Jackson native, had found a job back in the Great Lakes State. Soon afterward, Albion hired Moritz for its certification position, which he has held ever since.

But Moritz still has friends in the film industry and stays in touch with them. He also recounts stories to Albion students of his Hollywood days that still hold a special place for him.

“You see the films, actors and big money,” he says, “but behind all that are a lot of artistic, creative people who sometimes work 24/7 to make it happen.”