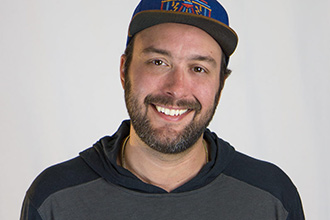 With more than a touch of irony, documentary filmmaker Andrew Cohn (right) admits his journey so far has provided him the kind of experience not often found in a classroom.

“It hasn’t been a straight path,” he said simply.

Still, he’s also learned through trial and error and experience that education can come in all forms and rarely follows a straight path. And that’s exactly what he hopes to convey at Albion College next week.

“I’m passionate about education,” he said.

An Ann Arbor native, Cohn’s journey first took him to Michigan State University to study journalism before circumstances forced him to look elsewhere. Then followed a stint at Washtenaw Community College and Eastern Michigan, where he graduated with a degree in independent study and an eye toward creative writing.

Now, more than a decade later and after moving to Los Angeles to take a swing at short story writing and screenwriting, Cohn has found his calling as an award-winning documentary filmmaker and who has had his most recent film, Night School, play at the prestigious Tribeca Film Festival last year.

And next week, Cohn brings his knowledge, experience, and background (and his film) to Albion College as a Visiting Scholar. On Monday, March 20, Cohn will talk about social media in Andy Boyan’s communications class and in Glenn Deutsch’s English class he will discuss advanced multimedia journalism. Later that day, from 5-7 p.m., an open house at the Ludington Center (at 101 N. Superior St.) will serve as a formal welcome to the community.

On Tuesday, March 21, he will join the education class of Suellyn Henke to discuss foundational contexts of education and later take part in another education class. On Wednesday, March 22, he will visit Marshall High School to teach an English class to high school sophomores. His program will conclude that evening when he screens Night School for the community at the Bohm Theatre starting at 7 p.m. It will be the first time the film is shown in Michigan.

Visiting Scholars is a College initiative that is being coordinated out of the newly opened Ludington Center. Leaders in business, education, arts, public policy, sustainability, athletics and more will be invited to share their expertise with students, and the community, over a length of time. At least one more multiday visit is in the works this semester, and the vision is for the initiative to evolve into an established scholars-in-residence program involving semester- or year-long experiences.

Cohn views his upcoming Albion experience as a valuable one not only for students, but for himself.

“I taught documentary filmmaking at Purdue [University] and I thought this would be a good opportunity to talk about some of my experiences and some of the tricks I’ve picked up along the way,” he said. “I want to share some of the insights I’ve had and, instead of theory, I’d like to give as much practical advice as I can.”

Cohn’s first film, Medora, made in 2013, was an eye-opening and often heartbreaking look at the small, scuffling town of Medora, Ind., and the high school basketball team generally considered the worst in the state. It won an Emmy Award, and Cohn’s follow-up was the ESPN 30 for 30 special on Danny Almonte, the New York City Little League pitcher who lied about his age.

Kyle Shanton, chair of Albion College’s Education Department, the department’s certification officer, Jason Moritz, and Karen Hoaglin, Liaison for the Fritz Shurmur Center for Teacher Development were instrumental in bringing Cohn to campus. Shanton said it began when Moritz saw Medora and was impressed by what it could provide as an educational tool.

“He came away thinking film as a medium could be used more intentionally to really educate adolescents and young adults,” Shanton said.

Cohn has been to campus before, in 2014, when he screened Medora in Towsley Lecture Hall/Norris 101 to an enthusiastic full house.

“The feedback was really quite impressive,” Shanton said. “Andrew was cordial and people really enjoyed him. Jason kind of kept up with Andrew on and off, and when Night School was released Jason said ‘He’s got another film. Can we bring him back?’”

“We really had a good time showing the film at Albion,” he said. “We just hit it off, so we were looking for a way to come back and show my films.”

The Importance of Storytelling 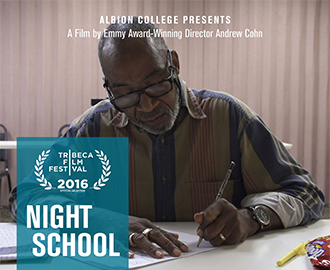 Seeking a way to make the trip economically feasible, in late January Shanton and department colleagues asked President Mauri Ditzler for a suggestion. Ditzler, in turn, suggested that Cohn lead off the Visiting Scholars effort.

“The rest is history,” Shanton said.

Cohn hopes to show students how important the concept of storytelling is to his work.

“I’ve been making films for 10 years now,” he said. “Storytelling has become something of a hot commodity. It’s going to really be in demand in a lot of different realms in the next few years. Storytelling goes back to the most fundamental things we do as humans. We create change, we inform. So I hope to share some of the things I’ve learned: how to create characters, interview techniques, inside-baseball stuff that kids may not be able to hear from more academic-oriented professors. Hopefully I can fill in some of the gaps.”

Night School focuses on three adult learners trying to earn their high school diplomas for a chance to change their lives. The idea came to Cohn from watching a brief mention on PBS.

“It said there was a cutting-edge school in Indianapolis and a 50-year-old guy was going back to get his high school diploma,” Cohn said. “I thought there was a lot there, his attitude toward education and the storytelling perspective. I said, ‘I’ll bet there are some really good stories at that school.’ It felt like a movie—with characters, a goal, road blocks, a set amount of time. There were storylines that hadn’t had a light shown on them.”

Cohn and his crew spent a year filming and a total of two-and-a-half years on the project from beginning to end. It premiered at Tribeca a year ago and will be shown in theaters in New York and Los Angeles in June. It also will be shown on PBS in June.

“If you’re going to be an educator, it’s a film you should see,” Cohn said. “It shines a light on something people really don’t study.”

And Shanton sees Cohn as an ideal way to start a new program.

“Schools really are, and continue to be, places that are at the center of communities,” he said. “They not only serve children and families for scholastic education, they’re gathering places for other kinds of learning and teaching. It’s important to see the immeasurable importance education has for both individuals and communities. I think this does that.”

There will be a public reception for Andrew Cohn on Monday, March 20, from to 5 to 7 p.m. at the Ludington Center, 101 N. Superior St. Cohn’s latest film, Night School, will be shown Wednesday at 7 p.m. at the Bohm Theatre. Both events are free and open to the public.