“My goal is to not just teach English; I want to learn Romanian as well” 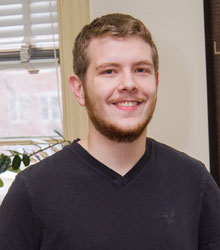 As a middle-school student, history and English education major Logan Woods randomly chose the country of Romania for a social studies project. It's the kind of story that warms a teacher's heart: From that assignment, Woods gained an abiding interest in the country. Now, as the recipient of a 2014-15 Fulbright Student Award, Woods will spend nine months in Romania, teaching English in a school setting.

"I'm very honored to be a representative of our country and of Albion College," says Woods, the fourth Albion Fulbright recipient in the past three years. "This is a confluence of interests I've had for a long time. I have an interest in education and it's what I plan to do. I have an interest in English, as it's one of my majors, and a year in Romania will be a great opportunity."

Woods already has a list of historical cities and sites he plans to visit during the year, but his cultural curiosity doesn't stop there. "My goal is to not just teach English; I want to learn Romanian as well," Woods says. "I don't want to be in a position where I'm this person teaching English, who is not there to learn."

Woods stands a good chance of being placed in a city on the Black Sea, and is excited by this possibility. "Politically, with what's going on in Eastern Europe at this time, Romania could be a very interesting place," he says. "I'm expecting there may be some heightened emotion in people and students around me."

The Fulbright Program is the flagship international educational exchange program of the United States. It provides and supports educators and researchers working abroad with the goal of enhancing mutual understanding between Americans and citizens of the host countries. Since 1948, the Fulbright U.S. Student Program has sponsored the work of some 100,000 students.

Albion College alumni have received a total of 13 Fulbright awards over the past 11 years; 11 were named teaching fellows in Europe and Africa, and two received grants for research in Tanzania and Brazil.

Woods, who is currently student teaching near Battle Creek, is a member of Albion's Phi Kappa Delta history honorary society and Sigma Tau Delta, the English honorary society. He will graduate this May with degrees in history and English and a concentration in the Fritz Shurmur Center for Teacher Development secondary certification program. He is the son of Tara Wilbur of Marshall, Mich., and a graduate of Homer High School.