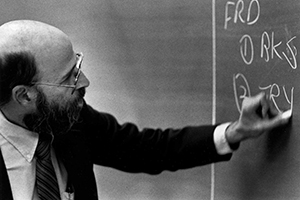 "Before arriving at Albion, I would have never believed that I would be an economics major in college," says Susan Carroll, '85. "As my advisor, Dr. Steinhauer suggested human resources as a career and assisted me in obtaining an internship. He later encouraged me to apply to Michigan State for a master's degree. The self-confidence that I gained from being successful in Larry Steinhauer's classes has served me well through my years in human resources and now as a small-business owner."