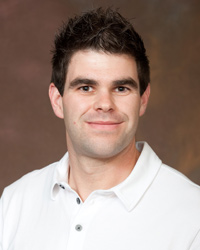 Osborn earned his Ph.D. from the University of Arizona and has been on the Albion College faculty since 2005. Communication Studies professor Jeremy Osborn has been watching a lot of couples watch television – and what he sees could save relationships. Osborn's research appears nationally in the September 2012 issue of Mass Communication and Society, and is sparking interest in mass-market media including Cosmopolitan, Men's Health and The Huffington Post.

"This is all really exciting for the College, and me as well," Osborn said of the media attention.

Osborn's research found that the more an individual believed in television portrayals of romance, the less likely they were to be committed to their relationships. In August 2012, several of the most-watched television shows (Burn Notice, True Blood, The Big Bang Theory, and Two and a Half Men) featured romantic relationships prominently throughout their episodes. This research is especially important at helping individuals understand the impact that television viewing can have on their relationships.

“In this study I found that people who believe the unrealistic portrayals on TV are actually less committed to their spouses and think their alternatives to their spouse are relatively attractive,” Osborn said. “My hope would be that people would read this article and take a look at their own relationships and the relationships of those around them. How realistic are your expectations for your partner and where did those expectations come from?”

“We live in a society that perpetually immerses itself in media images from both TV and the web, but most people have no sense of the ways those images are impacting them,” Osborn said. “The rate of marriage failure in the U. S. is not dropping, and it is important for people to have a sense of what factors are leading to the failure of so many relationships.”

The article, entitled, "When TV and Marriage Meet: A Social Exchange Analysis of the Impact of Television Viewing on Marital Satisfaction and Commitment," is featured in the September 2012 issue of Mass Communication and Society,