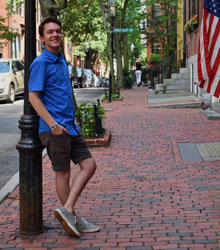 Zachary Hall, '18, near the College Diabetes Network offices in Boston last summer. He is a communication studies and Spanish major, the son of Daniel and Laurie Hall of Macomb, and a graduate of the International Academy of Macomb.

During his internship last summer in Boston, Zachary Hall recalls a colleague apologizing for tripping over a word during a presentation. A common occurrence for anyone—but for Hall, this unremarkable interaction had a unique significance.

"He said, 'Sorry, my blood sugar’s high,' and we all just understood," says Hall, who spent the past summer and this fall interning with the College Diabetes Network (CDN)—and the past eight years living with Type 1 diabetes. "It was weird, but cool to not have to explain that high blood sugar can make you feel like you are mentally blocked. It was so unique to be surrounded by people who just immediately understood these things with no questions asked."

Like it or not, Hall says that having diabetes means answering lots of questions—some medical, but many of a social, personal and professional nature. The CDN is a resource for college students with diabetes, with both online resources and 150 campus chapters nationwide. For his internship Hall focused on the latter, researching and writing content for the CDN "Off to Work" guide aimed at job hunters and recent graduates.

“People with a disability like diabetes are often viewed as unable to do certain tasks, and this stereotype can cause issues during employment," Hall says. He adds that many of his peers with diabetes come to CDN for advice on how and when to discuss their diabetes during an employment interview and in dealing with discrimination claims, among other employment-related topics.

"We're trying to provide safe and practical options for disclosing their condition, asking for accommodations and navigating other workplace needs related directly to diabetes," he said.

Hall, current president of Albion College's Union Board and a member of Alpha Phi Omega, is firmly rooted in his Albion community. Still, much of his passion for CDN is for his engagement with peers he's never even met. Hall is also serving CDN as a social media intern for the 2017-2018 academic year. He monitors the organization’s Twitter account and interactions, and acts as a host or participant of weekly online chats.

"Before CDN, there wasn’t any real support for college students with diabetes," Hall says. "There are topics like navigating the college social scene, transitioning into quality medical care at college, and dealing with the demands of a college schedule that can have great effects on an individual’s care. CDN’s goal is to provide support for these topics."

He adds: "I’m thankful to be a part of CDN’s team and to be able to create resources that will have a lasting impact on the lives of thousands of young adults living with Type 1 diabetes.”