Anna Miller, a biology major from Grand Haven who holds a concentration in environmental science, and Stephanie Sanders, a first-year chemistry major from Farmington, were students in Metz’s fall class that ran experiments on the uptake and impact of small particles of silver by Brassica rapa, plants such as turnips and mustard that have a complete life cycle of 44 days.

Under the direction of Professor Kevin Metz, Albion College chemistry students have successfully synthesized nanoparticles and attached them to other structures in the lab. Lyndsey Reynolds, '11, received the best poster award at the Midwestern Undergraduate Symposium on Research in Chemistry after successfully soaking small particles of palladium into a plastic membrane. Chris Kruppe, '13, hopes to take the next step as he begins to work toward a plan to form the nanoparticles into cube shapes.

Kruppe, a Naperville, Ill., native who is getting a serious look as the starting catcher for the baseball team, will take a weekend off the diamond in late March to attend the American Chemical Society (ACS) meeting in San Diego where he will present a poster about the beginning of his work in the lab. 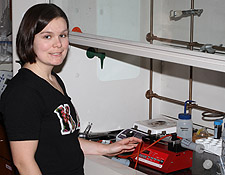 Lyndsey Reynolds testing a flow-through method of pushing reactants through the palladium-soaked membrane.Albion College chemistry students working in Professor Kevin Metz’s lab have learned that patience is important through Lyndsey Reynolds’ breakthrough, which led to her winning a best poster award at the Midwestern Undergraduate Symposium on Research in Chemistry at Michigan State University.

Brian Greathouse, '12, is considering a career as an emergency room doctor or a trauma surgeon, and he can make connections between that line of work and the minutes he's currently logging as the starting goalkeeper for the Albion College men's soccer team.

"I'm addicted to the adrenaline rush," Greathouse said. "One of the biggest parallels is that in the emergency room you can be having a slow night and all of the sudden a patient comes in and you instantly have to snap back in gear. In goalkeeping, you see a situation coming at you and have to make a decision. It's instinctual. I get into [the decision-making process] after going through the repetition of practice so many times.

"Anybody that succeeds at any task has to be confident," he added. "I believe I'm going to do the best job [at any task] and no one is going to do it better. It also provides motivation to improve if you don't achieve the desired result. The biggest key to my success is believing I can do it."