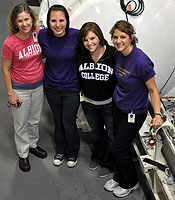 Vanessa McCaffrey, Erica Bennett, Casey Waun, and Nicolle Zellner visited the Johnson Space Center this summer.A number of Albion College students remain on campus every summer to complete scholarly work funded by the Foundation for Undergraduate Research, Scholarship and Creative Activity (FURSCA). The summer experiences of chemistry majors Erica Bennett, ’13, and Casey Waun, ’13 were enhanced when they joined professors Vanessa McCaffrey and Nicolle Zellner on a trip to the National Aeronautics and Space Administration’s Johnson Space Center in Houston, where they conducted experiments to investigate the role of impacts on simple organic molecules.

The research, funded by grants from NASA’s Astrobiology Institute and the American Astronomical Society, is to examine how organic molecules change in impact events. The Albion delegation and Johnson technicians worked together to use the center’s hypervelocity impact technology to “shock” a sample of sugars by firing a projectile at a metal target holding the sample. The pressure from the impact of a projectile hitting the target’s steel plug has the ability to change the sugar placed inside the target, which the scientists hope will provide insight to the origin of life.

The trip to Houston occurred near the end of the students’ 10-week FURSCA experience that ran from May 21-July 29. Bennett and Waun spent most of the summer analyzing the samples that came back from McCaffrey and Zellner’s winter trip to NASA’s Ames Research Facility in California. Bennett, who noted she will analyze the samples from Johnson as part of an independent study during Albion’s fall semester, said teamwork was vital on the brief trip to Johnson as the group had to work through hardware complications to get four shots fired.

“The gun at Johnson Space Center is ideal for this experiment,” said Bennett, a Rockford, Mich., native. “The Johnson gun can measure velocity, which informs us about the amount of pressure hitting the target. We were banking on the Johnson gun and we were excited when it came online.

“There was a miscommunication about the experimental conditions we wanted to test, but we did a good job of working together to get the best result for our samples,” she said.
In addition to the experiments, Bennett and Waun toured some other NASA facilities, including the lunar processing lab. Bennett noted that seeing samples of the lunar surface returned from the Apollo 15 and 16 missions in the early 1970s made her “feel small,” in that she got a grasp of the importance of the Moon's gravitational influence that produces the ocean tides and the minute lengthening of the day.

When working in the lab, Bennett and Waun found that dealing with a water-soluble ingredient like sugar can be difficult, but it’s just part of the process of contributing to the field of science. That, and being in a lab during sunny summer days.

“Being inside the lab [during the summer] is just as satisfying [as being outside] because the process of learning new things is like a high,” Bennett said. “You get proud of yourself when you discover something new, and we truly are doing something no one else is doing.”

Though the students are entering their junior years, it is never too early to be looking forward to graduate school, and Bennett and Waun both said they expect the FURSCA experience to give them an advantage in the competitive application process. Waun said she will move on to different projects while Bennett will continue astrochemical research in hopes of working for NASA someday.

Bennett noted, “There are a lot of opportunities to look at interstellar medium (the space between stars) and what triggers the chemical makeup of molecular clouds and the elements in galaxies.”

“I don’t know if I want to pursue space chemistry as a career, but I would like to go to graduate school for chemistry research,” Waun, a native of Allen Park, Mich., said. “[The FURSCA project] opened the door to research and now I would like to continue to get my feet wet and decide what kind of chemistry I’m most interested in.”