Dan SteffensonEmeritus professor of chemistry Dan Steffenson passed away May 16 in Saline, Michigan, at the age of 77.

A member of Albion College's Chemistry Department from 1967 until 2008, Steffenson was legendary for his professional devotion on a campus rife with passionate instructors. "Students could come by his office at 11 p.m. and Dan would be there, happy to answer a question," said longtime colleague Dennis Gaswick, professor emeritus of chemistry. "You could tell when there was an exam in Physical Chemistry because Dan would be there well after midnight, with a line of students outside his door."

A physical chemist who did his doctoral work at Harvard University under a Nobel laureate, Steffenson focused many sabbaticals on research at the Ford Motor Company, the University of Michigan, and Oak Ridge National Laboratory. He was also deeply interested in the teaching of chemistry, working with his department colleagues to develop improved techniques and materials for chemistry instruction. With Gaswick and emeritus professors Jack Crump and Bob Dininny, Steffenson wrote a general chemistry text used at Albion for several years.

"Graduate students like Dan—Harvard students, world-class research students—were supposed to go to the other Ivy League schools and do research and avoid teaching and make more world-shaking discoveries," says chemistry professor Cliff Harris. "But what moved Dan was young people seeking to understand. What got him out of bed, so that he could get back to his office to answer a few more questions about—let’s be honest—often the simplest of chemical concepts, was the picture in his mind of a student who wanted to learn waiting outside his office door." Teaching was Steffenson's passion; he impacted Albion students in the lab and classroom for more than four decades.Harris goes on to note that he and his colleagues were often among that waiting crowd. "It's hard to imagine how he ever got any work done," says Harris. "Dan talked me into some great projects, and out of some seriously flawed ideas. He calmed me down when I needed to chill, and got me motivated when I couldn’t imagine grading another exam. I know at least a dozen of us—in and outside of the Chemistry Department—relied on him in exactly this same way."

Steffenson served as Chemistry Department chair for more than 20 years, but he was involved in many areas of campus. With the late philosophy professor Ned Garvin, Steffenson developed materials for and taught a course on the philosophy of science. He served as Basic Ideas Program director and held the Prentiss M. Brown Honors Professorship, co-authored two interdisciplinary education grants awarded by the National Endowment for the Humanities, and worked with the College's Summer Enrichment Program for local youth. Steffenson, also a longtime member of the Albion College Choir, was Albion's first faculty member to participate in a faculty exchange with the University of Cape Town—he and two UCT colleagues presented a paper at the 1991 South African Chemical Institute meeting.

"I was the only biology major who was a teaching assistant in the Chemistry Department," said Linda Horder Chencinski, '89. "Dr. Steffenson knew that I worked two other jobs to make ends meet and I needed his job! I promised him I would work hard, but I needed his help to really learn the material. He would sit with me for as long as it took until I understood each lesson plan.

"Dr. Steffenson was the most intelligent and most humble person I've ever known," Chencinski added. "He treated his students with respect and kindness. His 'genius' was genuine but more importantly, approachable. His lust for learning and laughing was contagious. And I'm a better person for knowing him." 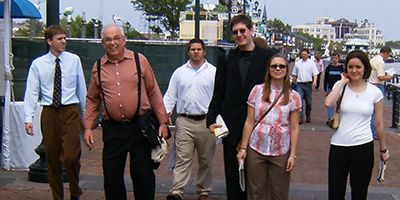 Steffenson (second from left) with Albion students at the 2008 American Chemical Society national meeting in New Orleans. Students from left: Tom Freeman, '09, Joel McDade, '08, Ryan Stowe, '10, Sarah Kelley Stahl, '09, and Stacy Capehart, '09.Steffenson won several teaching awards during his Albion tenure, including the Students' Choice Award and the inaugural Putnam Faculty Mentoring Award, both received for his last year of teaching. A scholarship was established in his honor in 2008.

"I am forever grateful for the amount of time Dr. Steffenson spent helping me understand, and get excited about, chemistry," says Frank Broccolo, '99, also a frequent visitor to Steffenson's office. "He was my first instructor in Chem 121 and did an exceptional job welcoming and encouraging non-chemistry majors. The chemistry background I obtained at Albion College was instrumental in helping me succeed during medical school."

Retiring from Albion simply gave Steffenson a chance to do more teaching. He took a turn as director of the Associated Colleges of the Midwest's undergraduate research program at Oak Ridge, and filled adjunct teaching positions at Washington & Jefferson College, Albion College, and Bowdoin College.

A memorial service for Steffenson will be held later In 2018 in Albion. Members of the Albion College community are invited to share their thoughts and recollections on Facebook and LinkedIn.