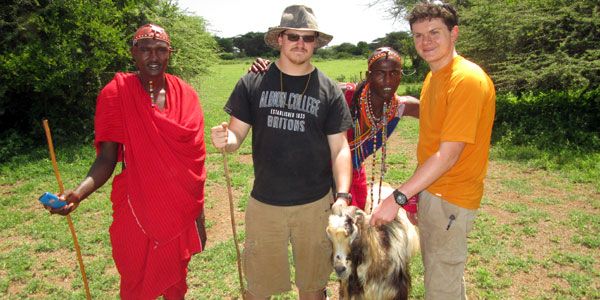 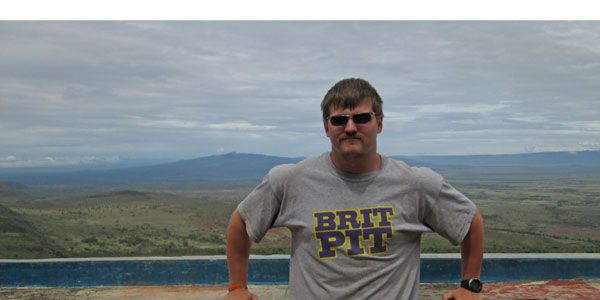 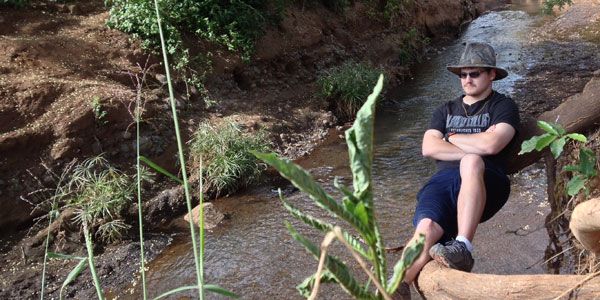 Hall in the field near Kimana, Kenya. 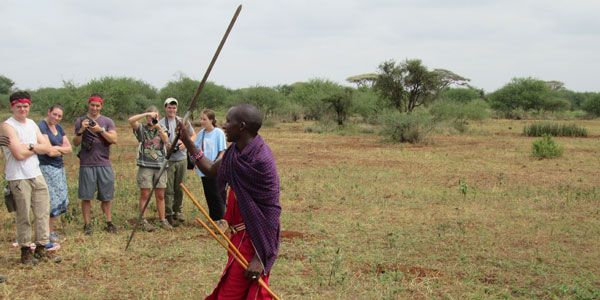 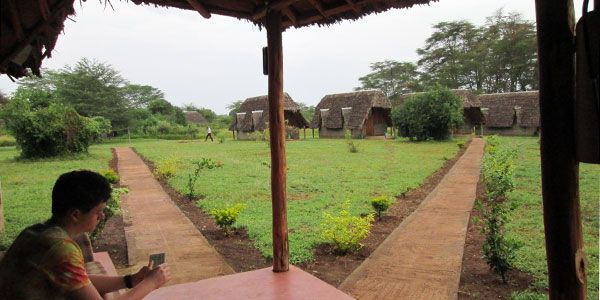 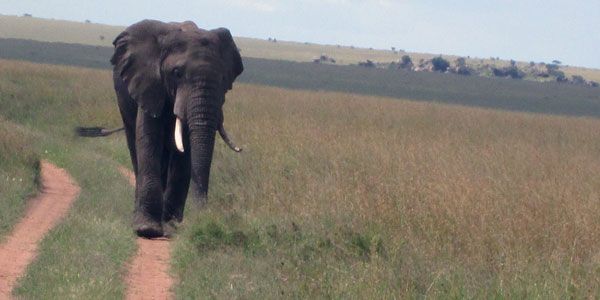 Wild elephant on the road in Serengeti National Park, Tanzania. 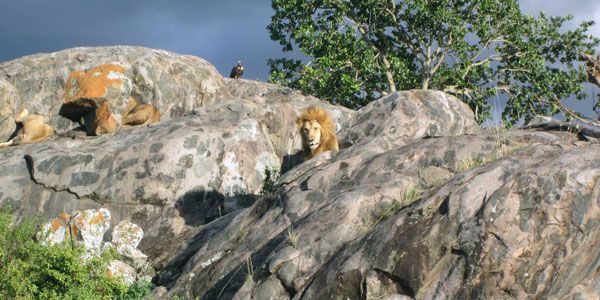 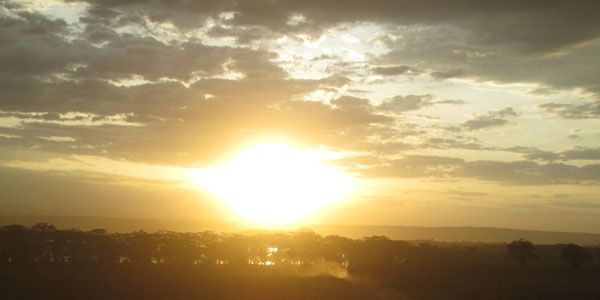 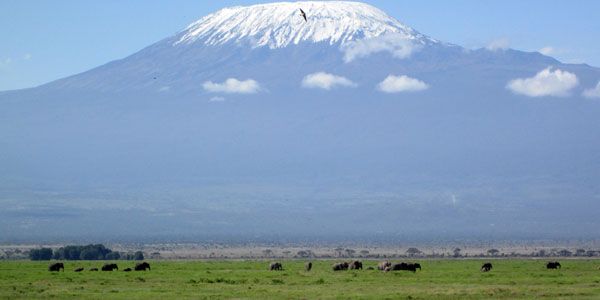 Wildlife studies and cultural traditions in Kenya and Tanzania

"You have to push it, rather than throw it," says Josh Hall, '14, of a spear-throwing lesson he recently had with a group of Maasai Moran in Kenya. The other American students managed six to 10 meters, but "I ended up throwing about 20 meters," said Hall, adding that the best Moran throws were 50 meters.

"The Moran all high-fived me and encouraged me to stand with them while the others were throwing," Hall says. Later on, our guide said the Moran called me a 'white Moran' and said they should adopt me. I kind of wished that I could have had the chance to become a warrior in the peaceful country."

Discovering a new talent was an unexpected bonus for Hall, who is spending the spring 2014 semester in Kenya and Tanzania, learning Swahili and studying wildlife management, wildlife ecology and environmental policy.

"In Kenya, I conducted field work in Amboseli National Park, the town of Kimana, Kimana Wildlife Sanctuary and Lake Nakuru National Park. I looked at problems that arise when animals and humans interact," says Hall. "For instance, elephants from the park occasionally travel out into the surrounding community and eat a field of tomatoes for a midnight snack. There are a lot of farm holders who are concerned with defending their livelihoods."

Lodgings in Kimana Bush Camp were cottages known as "bandas," with communal toilets and showers and an Internet-wired library. Lunch and dinner always include ugalli, "which is supposed to give great strength to those who eat it," says Hall. "It is very bland and rubbery. I found out that it's boiled cornmeal. It is a staple in all households, as I have discovered in my homestays."

In Tanzania, Hall is conducting research on knowledge of traditional medicine practices in Buger, a community near Lake Manyara National Park. He is required to present his findings to at least 100 community residents and representatives of tourism businesses and government agencies. "In the five-year research plan for the location, future students will use this information—maybe to look at what plants are used most often, what plants prevent and treat certain illnesses," Hall explains. "This could also be used to compare the use and effectiveness of traditional and Western medicine, or to determine who is using what treatments."

Following his graduation in December 2014, Hall hopes to work with Michigan's Department of Natural Resources or state park system, bringing some of his African-based knowledge and perspective to the job. "In Tanzania, we visited a homestead where cattle were fed leaves and twigs from trees that regenerated limbs quickly. They use cow dung to produce methane gas for cooking, instead of firewood. These are new practices and show how people can change their impact on natural resources," explains Hall.

"Albion prepared me well for this program," Hall concludes. "Learning how to properly write a scientific paper, present information that contradicts or supports literature, and just sit patiently when doing field work, especially when wild animals refuse to cooperate and hide until you are gone—these skills, and obviously the knowledge acquired, have been invaluable."

Joshua Hall, '14, is majoring in biochemistry. He is the son of Teddy and Dawn Hall of Nashville, Michigan, and a graduate of Maple Valley High School.