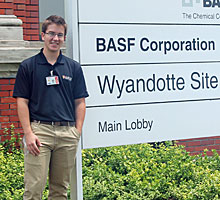 Joe Thomas, '14, a major in chemistry and philosophy and a member of the Prentiss M. Brown Honors Program, is the son of Patrick Thomas of Plymouth, Mich., and Nina Thomas of Belleville, Mich., and a graduate of Plymouth-Canton High School.

If you use sunscreen, detergents, paint, garden-care products or a car, chances are you own something that uses BASF technology. BASF is the largest chemical company in the world, but not many people know their name because they don’t put out many products straight to the shelves. It has more than 40 U.S. operations, and I'm spending the summer with BASF’s Wyandotte site in the High Temperature Polymerization Group.

My work this summer is in the chemical engineering department working partly with an Albion alumnus, Jacob Stoneburner, '11. By producing some polymer resins through different chemical reactions, we hope to come up with cheaper and more effective dispersing agents and organic coatings. Dispersants are used to make sure that paint coats are uniform in appearance and maintain that uniformity on a variety of surfaces, from the walls in your house to car finishes. The paints can be used strictly for coloring, or to prevent corrosion, and more.

Polymer science isn’t something I’d done at Albion yet, so there was a pretty steep learning curve for the first couple weeks. It’s a good experience, being exposed to something I’ve never had to deal with before. Polymers are very large molecules and they react differently than most chemicals we use in labs at Albion. The reactions seem straightforward on paper, but in chemistry almost nothing works the way it’s supposed to, and so there’s a lot of problem-solving involved. Figuring out the quirks of each reaction and fine-tuning things like temperature and amounts of starting materials can mean the difference between a great new product and meaningless waste, and being able to work through those details is great training for a future career.

If the reactions go well, I’ll also get to see how my new products work in applications testing, something you don’t really get to see in an academic lab. It would be nice to know that something in the real world is better or cheaper or less harmful to the environment because of work I did. But that’s only if the reactions work.