Albion College students Eric Fink and Alissa Reddy were recently awarded internships with the Research Internships in Science and Engineering (RISE) program, part of the German Academic Exchange Service (DAAD). The DAAD/RISE program will pay Fink and Reddy, both majoring in chemistry and German, while they live in Germany for three months, working with German doctoral candidates on chemistry research. 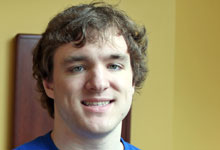 "I am beyond excited to explore the world of chemistry in a country in which I am also learning the language!" enthused Fink (right), who will remain at the Technische Universität Kaiserslautern after the internship for a language-focused semester. Fink's summer research is focused on the synthesis of ligands with the ability to coordinate two metal centers. "This project is relevant to my experience," Fink said, noting that much of what he'll do this summer involves equipment and techniques he's used with Albion professor Cliff Harris. In addition, "Most of the biggest pharmaceutical companies, like Pfizer and Bayer, are German or do a lot of research in Germany," he said. "I'm interested in going into that industry and this will be great experience in a lot of ways." 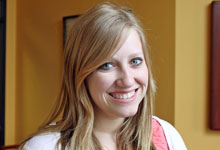 Reddy (right) spent the fall of 2012 in Germany, and to return so soon "with a stipend is an added benefit," she said. Her summer research, at Johannes Gutenberg-Universität Mainz, will deal with polyether-based lipids and their structural integrity under different conditions. Like Fink, she's interested in a career with a multinational pharmaceutical company. "Albion College definitely improved my chances of being chosen for this opportunity because I have had a lot of experience in the lab and also in the German language," she said, noting that their expertise with German placed both her and Fink far above many other candidates. "I also joined a chemistry research team with [Albion professor] Cliff Harris, where I acquired more knowledge of the technology that I'll use this summer."

Fink is majoring in chemistry and German and is a member of the Prentiss M. Brown Honors Program. He is the son of Douglas and Sherri Fink of Pleasant Lake and a graduate of Northwest High School. Reddy is majoring in biochemistry and German. She is the daughter of Jeffrey and Susan Reddy of Ortonville and a graduate of Our Lady of the Lake High School.