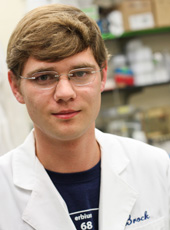 Ethan Brock likens the cancer biology research he’s been doing this summer to the process of assembling the pieces of a puzzle. Sponsored jointly by Karmanos Cancer Institute and Wayne State’s Cancer Biology Graduate Program, Brock’s summer research fellowship has introduced him to cutting-edge research in this field. He acknowledges that even though great progress has been made in our understanding of cancer we still have much to learn.

This rising senior at Albion College explains that his younger brother has inspired him to make discoveries that will improve people’s quality of life.

“Adam has taught me a lot over the past 19 years about how to be a better person,” says Brock.  “Living your life with a severe case of autism is by no means easy, yet he manages it with a smile. To live that way, you need to have the patience of a saint as well as a forgiving heart, and he most certainly has both. His example is what originally set me on the path I now travel.”

A Grosse Pointe resident, Brock completed the 10-week fellowship on Aug. 13 working with a team studying the role of specific proteins in the progression of ductal carcinoma in situ (DCIS), the most common type of non-invasive breast cancer. While there have been technological advances in detecting DCIS, scientists are still searching for a way to distinguish between DCIS cells that will remain dormant and those likely to progress to invasive ductal carcinoma.

Brock will spend much of the upcoming academic year applying to doctoral programs where he will continue his quest of becoming a translational researcher working between the traditional lab bench and the patient’s bedside. He hopes to one day assist in the development of treatments targeted specifically to killing cancer cells.

“I would like to help design novel treatments,” Brock said. “Cancer cells are still your cells. It’s just that they behave in a detrimental manner that is different from your normal cells, so we consider them to be a problem. If I can help design new therapies that exclusively target certain cancer cells, then a lot of people could potentially benefit from those therapies.”

This summer research has been quite different from the genetics work Brock has been doing on Albion’s campus with biology professor Ken Saville. Concentrating in neuroscience, Brock will be completing a directed study this year as he examines the interaction of two proteins thought to play an important role in the development and progression of Parkinson’s disease.