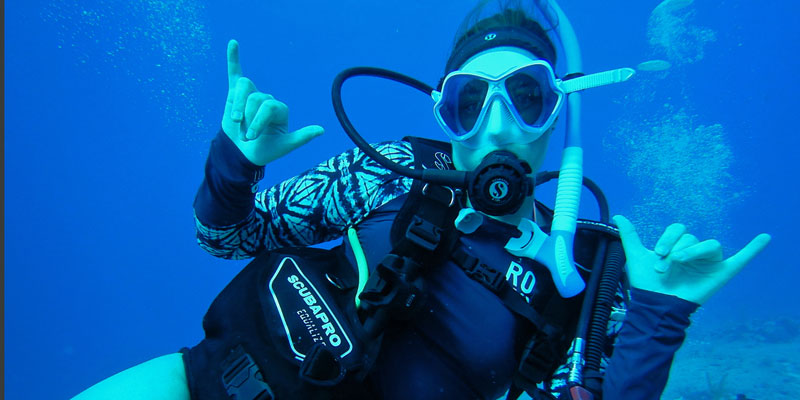 Annika Markovich at the Spanish Chain off Long Cay, South Caicos Island. A senior majoring in biology, Markovich is the daughter of Diane and David Markovich of Eden Prairie, Minn., and a graduate of Eden Prairie High School.

To paraphrase an old saying, Annika Markovich’s summer is water to drink—but that’s about it. “We get only one freshwater shower a week and there are no laundry machines, so everything is washed with salt water from the ocean. It was a large adjustment, but I got used to it. It is just a very different lifestyle than the one we live in the States,” she says.

Still, Markovich realizes that a summer in the Caribbean—earning college credit—offers little to complain about. Through the School for Field Studies (SFS), Markovich is studying tropical marine ecosystems in South Caicos, part of the British Overseas Territory of Turks and Caicos.

The biology of South Caicos means that Markovich’s lessons include several hours each day in coral reefs, mangrove forests and seagrass meadows. Although she has been fascinated by marine biology since childhood, Markovich had never considered learning to scuba-dive before this experience. “I found out here that I really love to scuba-dive, which is something I would have never tried back in the U.S.,” says Markovich.

She also discovered an affinity for field work. “Lots of people would not enjoy spending hours out on the ocean in a small boat, but I loved it,” Markovich says. “We fished for sharks to tag for research and release back into the ocean. We laid fishing lines with cement blocks and buoys and weight. As students, we got to bait the lines with barracuda and put them in the water and help record all of the data. A lot of people would shy away from the manual labor and the long hours in the sun, but I loved every minute I got to spend out on the water.”

The students contributed data to CoralWatch, an international organization dedicated to monitoring the health of reefs around the world. Markovich did several dives into both official Marine Protected Areas and nonprotected areas, assessing the health of the coral by matching its color to CoralWatch color panels. She and her fellow students also counted living and dead crustaceans, recorded marine life species they saw, and mapped marine habitats. A dive-site visitor “I found a conch that was over 30 cm in length, and we got to see all of the reefs around the island and see amazing species like reef sharks and stingrays and an octopus,” Markovich marvels. “Even when we were doing school work, it never felt like work at all because everything was so much fun and so amazing.”

Back on land, Markovich is learning about and working on issues related to marine ecology and humans. “We learned how science impacts governmental policy and how management of costal ecosystems is a collaborative process with government officials, residents, scientists, even tourists,” she says. In addition, SFS students assist with youth soccer teams, give swim lessons to local children, and help with ongoing cleanup efforts following 2017 hurricanes Irma and Maria.

“This whole experience has made me realize that I chose the right career path. Going abroad has made me broaden my horizons and look at graduate schools outside of the U.S.,” Markovich says. “I have met people in this community and from all around the world here. Albion helped me by giving me the confidence and the inspiration to study abroad and seek out unique opportunities like SFS."