Home at Last: Sacred Zuni Artifact Returns to Where It Belongs

According to the legend passed down over the centuries by the Zuni people, they were twin brothers—known as the Evening Star (the older brother) and the Morning Star (the younger).

They were mischievous by nature, especially the younger brother, and they resided in, carved out of cottonwood, that were called Ahayu:da. They loved to torment humans and, since they were created by the Zuni, they answered to no one except those who spoke the Zuni language. 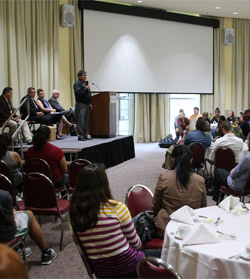 Zuni elder Nelson Vicenti speaks in Upper Baldwin August 30 thanking Albion College for the return of its sacred Ahayu:da. Also on stage, from left, are fellow Zuni elders Carleton Bowekaty and Octavius Seowtewa as well as art history professor Bille Wickre and President Mauri Ditzler. For the Zuni people of the rugged Southwest, the Ahayu:da are among the most sacred of artifacts, protectors of the people and an integral part of their civilization and tradition.

“The intention was made to protect the Zuni people and taken items chip away at the protection of the Zuni people,” said Octavius Seowtewa, one of three elders on the Albion College campus August 30 to reclaim some of that protection.

It has been a long, sometimes frustrating, but always enlightening journey for the Zuni and Albion College, but an important artifact, and a symbol of the Zuni tradition, is back where it belongs.

An Ahayu:da, a two-foot-long carved symbol that was donated from an alumna's family to the College decades ago and was lost in time and memory, will take its place with hundreds of other Ahayu:da, in a roofless building on tribal lands in New Mexico where the energy and spirit of the twins will be absorbed back into the ground.

“The weather will take the Ahayu:da the way it was intended," said Seowtewa, who has been a part of repatriating Zuni artifacts for more than 20 years, including recently traveling to Europe to reclaim items there.

Three Zuni elders—Carleton Bowekaty, Nelson Vicenti and Seowtewa—came to campus to receive an Ahayu:da that had resided in storage since 1973.

The saga really began two years ago when Albion art history professors Bille Wickre found the artifact in the College vault in the basement of Bobbitt Visual Arts Center as she prepared to teach a class on Native American art that fall.

After learning just how important it was, she contacted the Zuni, who saw a photo, determined it was authentic and thus began the process of repatriation through the federally mandated Native American Graves Protection and Repatriation Action (NAGPRA). 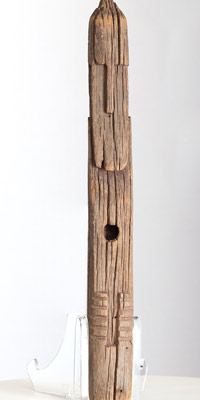 The Ahayu:da, believed to be from the 19th century, was in Albion's possession since 1973. It was returned to the Zuni people in a ceremony August 30.In the meantime, she found a student, Chelsea Adams, '17, to research and document the Ahayu:da. She found it was carved in the 19th century and was one of two that are created each year by the Zuni to absorb bad spirits and protect the tribe. They continue to protect the tribe even after they are replaced by new ones each year.

Return of the Ahayu:da was no simple matter. Both Albion and the Zuni had to complete NAGPRA protocol, which took several months, after which the Ayahu:da had to be claimed in person by Zuni representatives at an auspicious time. “The spirit has to come with the Ahayu:da,” said Vicenti. “If the spirit is left behind, it’s mischievous and can cause trouble.”

The process of repatriation culminated August 30 in a private cleansing ceremony followed later by gift presentations and then a public event featuring a documentary on the Zuni nation. It ended with pleased visitors.

“This builds up the protection (of the Zuni people),” Seowtewa said. “We were very emotional this afternoon (during the cleansing ceremony) because we had an opportunity to see the Ahayu:da. We’re glad it’s coming full circle.”

The three elders will return the artifact to their home in Zuni, New Mexico, and present it to the bow priest (who is ailing and was unable to make the trip), where he will pray over it before placing it in its final resting place.

“It makes me feel better,” Bowekaty said. “And it will make the bow priest happy and that’s very important. The tribe is very grateful for that.”

Albion College President Mauri Ditzler also acknowledged that while it took several decades for the Ahayu:da to find its way home, the result was worth it.

A donation has also been made to the Crow Canyon Archaeological Center for the Zuni Kiva Project in honor of the repatriation of a Zuni War God by Albion College to the Pueblo of Zuni.

“We know we’ve made a friend in Albion College,” Bowekaty said.

For Wickre, it was a bittersweet conclusion to what had become something of a quest for her.

“We come together to mark a special day in Albion College’s history, the day we are able to return an important cultural item to its rightful owners,” she said. “For me today is a joyous end of a journey that began with collaboration with other scholars and students and that was supported by many people at Albion and at Zuni.”

And for the Zuni, it was yet another opportunity to recapture some history that for too long was lost.

“This was a day that was a long time in coming,” Bowekaty said.

If you’d like to make a donation to the Crow Canyon Archaeological Center for the Zuni Kiva Project, go online to https://4454pp.blackbaudhosting.com/4454pp/Total-Giving. The Crow Canyon website is crowcanyon.org.