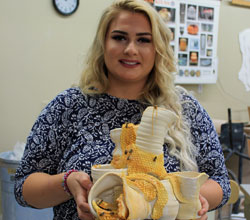 "It was challenging to try and create these honeycomb forms; the bees are definitely much better at it than I am," says Athena Balcoff, '18, an art major and educational studies minor from Troy, Mich.

Students learn a lot of interesting things while doing research, and Athena Balcoff, '18, is no exception. "I found out you can order dead bees online," she says. "I'm not really sure what other people use them for, but I wanted to use them for my art."

Balcoff purchased the bees for her Foundation for Research, Scholarship, and Creative Activity-funded summer project, "Colony Collapse and the Bees." The title couldn't be more straightforward, but Balcoff's eventual sculpture collection will go far beyond the research she's done over the last several months.

"I wanted to create a visual and emotional expression for the viewer about this issue," Balcoff explains. "Sometimes people look for a deeper meaning when examining art and I wanted to have the observer consider how bees influence our world and what would happen if they disappeared."

During her summer research she experimented with different ways of building sculptures to arouse and elicit emotion from the viewer. Wanting to portray the idea of collapse and decay, Balcoff relied on techniques that other ceramicists often avoid.

“You can make something crack by adding too much water to it, and sometimes I like that look. If you partially dry a piece with a torch and then place it on the wheel again, it will crack around the edges, and I like that, too," says Balcoff.

Other cracks, however, occasionally spelled disaster. "if something isn't hollowed out properly, it cracks in the kiln," Balcoff says. "You can spend weeks on a project and if it doesn't fire correctly, you have nothing to show for it."

Except for the dead bees and beeswax, Balcoff's pieces are made entirely of clay—thrown on a pottery wheel, hand-built and carved. Delicate honeycomb forms are draped around her sculptures of fractured pots. She then covers the ceramic "honeycomb" with beeswax and adds the dead bees to create a life-like effect.

And while bees are her work's named focus, human body parts, especially hands, are featured throughout. This, says Balcoff, brings in her second, more personal definition of "colony collapse."

"Recently I have had family members who have been diagnosed with various illnesses, so in my own life, I'm experiencing my own colony collapse," she says. "I'm trying to portray how humanity is harming bees and the environment, but also want to illustrate this deeper meaning my art has to my own life."

Indeed, Balcoff discovered that her efforts to create honeycomb forms gave her an added perspective on the bees' work. "It was challenging to try and create these honeycomb forms; the bees are definitely much better at it then I am," she states. "Before I was given this FURSCA opportunity I was very fascinated with the bees, but now I feel as if I learned a great deal more about the bees from trying to do what they do, and re-create these beautiful forms."

Balcoff hopes these sculptures will serve as a springboard for future works in her art career. She also intends to use “Colony Collapse and the Bees,” as her main focus in her applications to graduate school.