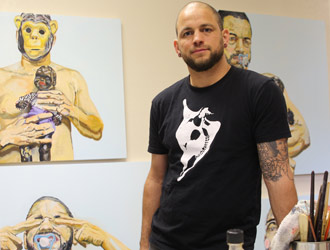 Michael Dixon, associate professor and chair of Albion College's Art and Art History Department, stands in front of several paintings he recently created at the prestigious Yaddo residency in upstate New York. Dixon's art springs from growing up in a world where race is a constant issue. "Hopefully my work will ask some questions to the viewers,” he says.

“People won’t say, ‘Oh, this matches my furniture,’” says Dixon, an associate professor who has been at Albion for 10 years and is currently chair of the Art and Art History Department.

Perhaps not, but they will still say plenty about his introspective paintings that focus on race and violence in America and which flow from a place he knows only too well.

“Identity issues have always been an overriding theme,” says Dixon, who grew up in San Diego, California, the son a white mother and a black father whom he never knew. “I grew up in a very diverse community and I didn’t discover I was black until I was 6 or 7. I identified myself as white.”

But as he grew older and learned more about himself and the world in which he lived, his view, and the views of others, changed.

“I’ve been identified as black, as Puerto Rican, as Jamaican, as white,” he says. “Then I decided I’m not even going to worry about it. I’m not white and I’m not black. I’m just Michael.”

His views—of himself and of his world—have shaped him as an artist and provided him a forum to paint what he wants, and needs, to paint. And his work is gaining national and international attention.

In May, Dixon’s work was part of an exhibition in Izmir and Istanbul, Turkey, which featured 19 Afro-Turkish portraits from his "Shared Histories" series, which he painted in 2011 and 2012.

He is also part of an artist collective formed at the University of Colorado (where he earned his graduate degree) called The Artnauts, a group which uses its art as a tool to address global issues.

Dixon’s art was shown earlier this year at collections at the University of Texas and the University of Utah as well as in Sarajevo, the capital of Bosnia and Herzegovina. His work was also part of a traveling exhibition of artist books last winter called "Love Library" that has made stops in Cleveland, St. Louis, Detroit and Chicago as well as in Ethiopia and Zimbabwe.

Most recently, Dixon completed a three-week artist residency at the prestigious Yaddo retreat on a 400-acre estate in Saratoga Springs, New York. With a mission to nurture the creative process by providing artists an uninterrupted opportunity to pursue their work, it draws artists from film, literature, music, photography, painting, choreography and more.

For Dixon, who had applied several times earlier for the residency before being accepted this time, it was the opportunity of a lifetime.

“Yaddo is the top tier you can go to,” he says. “I even avoided reading the résumés of people who were there because I didn’t want to be intimidated.”

The residency provided Dixon and the other artists with studio space to create, an apartment and even a chef to prepare whatever he wanted. “It’s a distraction-free environment,” he says. “It’s a way of getting work done—and to network.”

Dixon created several works while in New York, including six self-portraits with a distinct twist and several others that are still life paintings.

“They have to do with identity and how the more things change, the more they stay the same,” he says. “We talk about race in America as black and white—there’s no nuance. I feel like I’m tackling a tough issue and people can come at it in lots of different ways. Hopefully my work will ask some questions to the viewers.”

In the last year, Dixon began working out of his own studio in downtown Albion. On occasion, he sells some of his creations, but that’s not what motivates him.

“I don’t have the market pressures to make a certain kind of image, so it frees me up to make what I want to make,” says Dixon. “It can be a vulnerable space, and painting is a positive place to unpack these tough topics.”