The 500-year-old artifact was given to the College as a gift in 2003. It will join what experts have concluded is its twin in a museum in the Chiapas region. 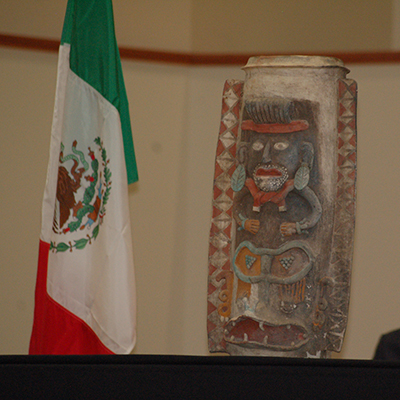 The artifact was on display during a formal repatriation ceremony April 13 in Goodrich Chapel. (Photo: Savannah Waddick, ’24)The travel of a centuries-old Mayan urn to Albion—and a surprising link between its birthplace and its temporary Michigan home—were revealed at Albion College on April 13. In an international event, the College affirmed the repatriation of the urn to the government of Mexico.

The urn, created by Lacandon Maya in the Chiapas region and which dates to ca. 1525, came to Albion in 2003 as part of a collection of papers, photographs and artifacts given to the College Archives by Marvin Vann, ’40. Vann spent many years in Mexico on a personal mission to study communities of indigenous people in remote areas, most of whom had little knowledge of any modern societies.

Vann created maps of the area and scuba-dived with crocodiles to do underwater archaeology. He also helped himself to artifacts, like the urn, that he recognized as exceptional.

Arizona State University archaeologist Dr. Joel Palka has studied Albion’s Vann archives, and had seen the urn on display in Stockwell-Mudd Libraries many times. At the repatriation ceremony, Palka shared his surprise when, on a more recent visit to the Museo de los Altos in Chiapas, he saw what he thought was Albion’s urn.

“I had been talking to [Albion professor of anthropology Dr.] Brad Chase about repatriating the urn and here it was!” he said. At the time, I didn’t even know the twin existed.” 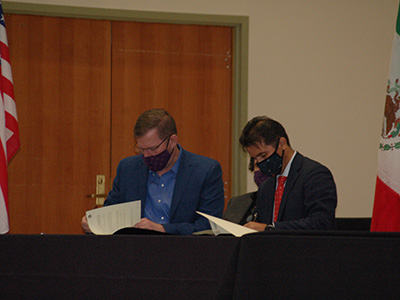 Dr. Mathew Johnson (left), president of Albion College, and Fernando González Saiffe, consul general, Consulate of Mexico in Detroit, sign the Deed of Transfer that officially transfers ownership of the artifact from the College back to Mexico and the Museum de los Altos in Chiapas. (Photo: Savannah Waddick, ’24)Palka has since studied both urns and notes that although nearly a meter tall, they are within a few millimeters of each other in size, a remarkable show of technical skill. He and his students have also tested tiny clay samples from each urn, work that revealed what Palka already knew; the near-identical urns were indeed made at the same time from the same source material.

Johnson said Chiapas “is one of my favorite places on Earth,” reflecting on his experiences with Mexican colleagues and his leadership at Albion today.

Taking responsibility for each other, through repatriation, “is part of the ‘purpose, belonging and action’ we’ve been talking about at Albion over the past year,” he explained. “I can think of no more fitting activity today of putting that purpose to action, to repair damage done by earlier generations. Today, that’s what we do, returning this beautiful urn … in the spirit of belonging to Chiapas.”

Read about the repatriation from the BBC

This event follows the August 2018 repatriation by Albion College of an artifact to the Zuni people of the American Southwest; read more