Professor of sociology emeritus Len Berkey passed away August 3 in Washington State. For more than 35 years, Berkey taught his Race and Ethnicity course to packed classrooms, exciting hundreds of students to wrestle with some of the most complex and controversial aspects of modern American society.

Assistant Director of Global Diversity Clarence Stirgus, '12, recalls that Berkey's enthusiastic classroom style extended to all of his teaching. "His classes were the ones where, as the students walked out, we continued the discussion as long as we could," Stirgus says. "Every single class was that way, because it was such life-changing material."

Stirgus also recalled Berkey's masterful ability to manage discussions that regularly became heated. "He handled things with grace and with strength," Stirgus says. "He looked to right people's wrongs in a way that called them in as opposed to calling them out." Berkey with students in 1996.Scott Melzer, professor of sociology, notes that Berkey's passion for his subject extended well past the classroom. "He was one of the original anti-racist educators on campus and was one of a handful of faculty whom students of color and other underrepresented students went to first when they wanted mentoring and support," Melzer says. "It's humbling to share a profession and department with someone who enjoys the depth of love, respect, adulation, appreciation and more from so many former students and colleagues that Len does. His alums are his legacy; they are devoted and impressive."

"Yes, Len influenced many students individually, opened their minds to new perspectives and helped shape their futures," says Trisha Franzen, professor of women's, gender and sexuality studies, who cites Berkey as one inspiration for her own decades-long work with community youth and gardening. "But he was a change leader for the whole College."

Barbara Keyes, professor of psychological science, conducted several studies with Berkey in the Albion Public Schools, one of which was a project funded by the Kellogg Foundation called Building Assets in Middle School Girls. Albion College students were recruited to serve as mentors as they participated in a year-long course exploring social phenomena relevant to their mentees' experiences.

According to Keyes, “As we designed the course, Len was a guiding force in our decision to use participant observation and ethnographic research as our primary data-gathering tools. Always the consummate teacher, Len inspired our students to use these tools to explore the lives of their mentees and to identify strategies for enhancing their growth and development.

"It was a privilege and honor to collaborate with a colleague so committed to integrating service, learning and scholarship," Keyes continues. "Len always challenged students to move outside their comfort zone and work toward a more just society.” 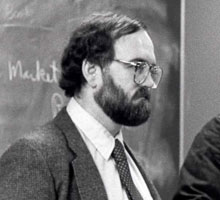 Berkey, pictured here in 1982, received his B.A. from Colgate University and his Ph.D. from Michigan State University. In the interim, he attended Union Theological Seminary in New York City.Berkey directed three study-abroad programs, one to Central Europe and two for the Great Lakes Jerusalem Program. In 2000, he and his students had to flee Jerusalem and ended up studying the Israeli-Palestinian conflict from Cyprus.

Berkey won numerous awards for teaching and mentoring, including a Michigan Campus Compact statewide Faculty Member of the Year award. In retirement, he moved with Ramona, his childhood sweetheart and wife of 52 years, to the Pacific Northwest, where Berkey eventually taught several courses for the University of Washington-Tacoma.

"No matter if it was in the classroom, a faculty meeting, an advisor meeting or an exchange in the Anthro/Soc office, Len was thinking about how to make an exchange into a simple teaching moment," says Anne Jarrad, '96, advancement director for Cleveland's Julie Billiart Schools. "Even when I talked to him late in his sickness, he pushed me on crime levels in my city, the city response, the court systems and the awareness our city had of racial inequities. Even in those last conversations, I felt myself on my toes, answering, defending and questioning all that I was presenting. He was challenging me to speak from evidence and not emotion."

"I talked to Len earlier this year; he was thinking about the pandemic and how he would teach it. He almost wished he had a class," says Erik Love, '01, a sociology professor at Dickinson College.

Love notes that while he has cherished Berkey's advising, mentoring and friendship over the years, the legacy of this relationship was the model of excellence that Len embodied. "He gave me career advice and no one I know had a better academic adviser," Love explains. "But mostly he taught me to be a better person."

Berkey is survived by Ramona, their daughter Erin, and three grandchildren. The family welcomes memorial contributions to the Len and Ramona Berkey Endowed Award in Sociology at Albion College.