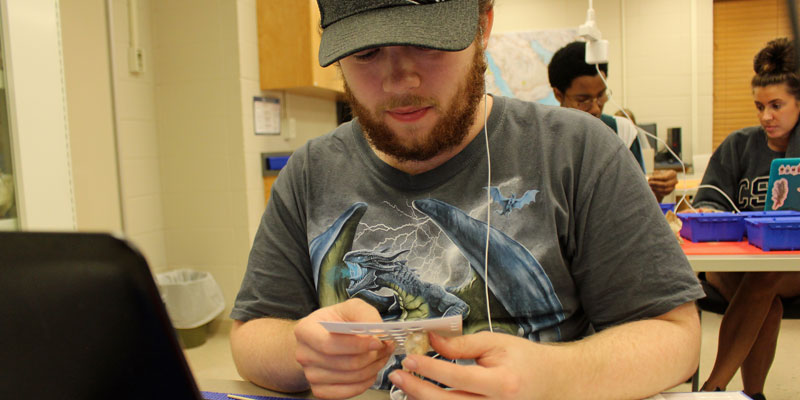 Charlie Downey, '20, categorizes a bone with the Munsell Color Chart. Downey is a senior majoring in anthropology and German and is a member of the Prentiss M. Brown Honors Program. Downey is the child of Jim and Sonja Downey of Tecumseh, MI, and a graduate of Tecumseh High School.

It looks pretty easy on television, but Charlie Downey, '20, knows that getting information from human remains isn't something you can do during the commercial break.

“We examined thousands of fragments of bone to see how burned they were, if they were measurable, what side of the body they were from, and if they had any warping to them," says Downey, who spent the summer doing archaeology research at the University of South Alabama. “This could take a while with fragments that were less complete or lacked features that made siding easy. This would often lead to heated debates with my research partner about what to measure and where to measure certain features. One bone could take multiple minutes. That may not sound like a lot, but we had over 1,000 fragments to look at, so those minutes really added up." Bone fragments in a sorting box.Downey was one of the first eight students chosen to assist a three-year project looking at Umm, a 4,500-year-old society that existed in the present-day United Arab Emirates. Sponsored by the National Science Foundation and directed by anthropologists at the University of South Alabama and Quinnipiac University in Connecticut, Downey and his student colleagues spent the summer with thousands of bone fragments from two comingled tombs discovered in the UAE and transported to Alabama.

Earlier excavations paint a picture of Umm an-Nar as a stable Bronze Age community, established around oases where more prosperous members lived in stone towers—exhibiting social stratification, Downey says. The excavations unearthed two large burial sites, each containing the remains of several hundred individuals, placed in the sites over a period of more than 200 years.

Learning more about the people buried in those sites could yield other information about the society, says Downey, who with a partner from the University of Southern Nevada took four different measurements of the humerus bones, estimating which were male and which were female.

It was—and wasn't—straightforward work. Downey and his partner first classified each bone on a six-color scale, rating each bone from pale brown, through black and gray, to white. "Bones that were white, or calcined, were graded separately," says Downey. "That color indicates they were exposed to high heat during cremation, which makes them shrink."

Then there was the issue of counting bone fragments. Careful not to count any individual twice, Downey and his partner only counted fragments that included at least two of the four different aspects they measured.

“I always felt bad when we found a fragment where one feature was perfect, but the others were nonexistent. We had to forgo using these despite their perfection. My partner and I would also get into arguments about the usability of different fragments," Downey explains. "We did a lot of training and we consulted each other all the time on how to be consistent and objective, but when you're working with real samples, they don't always fit a neat category. There might be a bump on the feature that one person measures and the other doesn’t. This would only change the measurement by a fraction of a millimeter, but when you are working with measurements that in some cases are as small as 10 millimeters, that's a huge difference."

In the end, Downey—along with the students examining other fragments—found no statistically significant difference in the proportions of males to females in either tomb. "This didn't support our hypothesis that the increasing social stratification would lead to more males being placed in the tombs," says Downey. This could be because social standing wasn't applied to the dead, or wasn't associated with either sex. "Of course, more research needs to be done," he adds.

"I enjoyed handling bones and I got pretty good at identifying which side the bone was from," says Downey. "This was also a great way to meet people from all over the country."