the Evolution of Human Beings 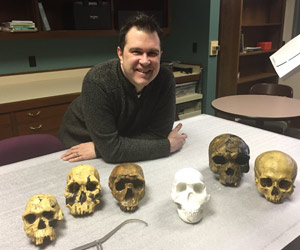 Albion anthropology professor Brad Chase spends some time with some old friends: (from right) plaster cast skulls for Homo sapiens from 50,000 years ago; Homo sapiens from 200,000; the 3-D printer replica of Homo naledi; Homo erectus; Homo rudolfensis and Homo habilis. The Homo naledi skull is the latest teaching tool for the department.

“I want to sit down and get to know it a little bit,” he said and laughs.

In his hands, he held a piece of the distant past brought to life by the unrelenting future.

“It’s a very recent and very exciting discovery because of what it is,” Chase said.

What it is is a full-scale plastic replica of the recently discovered Homo naledi skull, a discovery made in 2013 in South Africa by a team of scientists that has set the paleo-anthropology world on fire. The discovery of thousands of fossils in the hole of an isolated cave called the Dinaledi Chamber, tells yet another story about man’s evolution by presenting an extinct species of human.

Featuring an orange-sized brain and characteristics of much earlier hominin ancestors dating to around 2 million years ago, the species has now been dated to be “only” approximately 300,000 years old, contemporary with the earliest Homo sapiens and, indeed, may have shared the same African continent. Whether they interacted or not remains uncertain.

What is also exciting for anthropologists like Chase, though is that research from the find has been shared by the scientists involved – which is unusual in this normally insular and proprietary world.

Seeing it as a valuable teaching tool for various anthropology classes at Albion and a recent Albion Area Lifetime Learners class titled “What’s New in Human Evolution,” he decided to take advantage of the information available on the skull.

Chase was able secure the dimensions and details of the Homo naledi skull and, in a series of e-mails with the College’s Instructional Technology department’s Sarah Noah, set about re-creating the skull by using one of the College’s CubePro 3-D printers in Ferguson Hall.

“Brad reached out it and said there was this newly discovered skull,” said Noah, the IT department’s resident 3-D printer expert who also trains students on its use. “It took us a week to render the file and we had to create it from an anthropology website. Then we downloaded the file (with the design parameters).”

Then came the stressful part.

Ever so slowly, a cartridge of tough, impact resistant liquid plastic took the form of the prehistoric skull. All told, it took 140 hours, or five days, to create the skull with Noah and others in the IT department nervously checking often to make sure the printer cartridge didn’t jam with melted plastic.

“We started on a Wednesday or a Thursday and we had it running over the weekend,” she said. “That was terrifying. We thought we’d come in Monday morning and have a bunch of wasted plastic. If you learn anything about 3-D printers, it’s that they fail and they fail a lot.”

But not this time.

“We knew we could do it,” said Noah, who delivered the finished product to Chase in late February.

As well, this was by far the longest project the department has attempted, besting by far the 52 hours needed to create a replica of a medieval cathedral.

“To have a successful 140-hour project is a big deal for us,” Noah said.

It is, of course, not an exact replica of the skull but it will provide the anthropology department with a life-sized opportunity that can offer a new way of teaching. It also was less expensive producing this skull (it cost about $50) than ordering plastic casts of fossils from various anthropology catalogues—which don’t offer this new discovery yet.

“These tools allow us to incorporate the newest discoveries in our teaching,” Chase said. “It is an integral part of anthropology.”