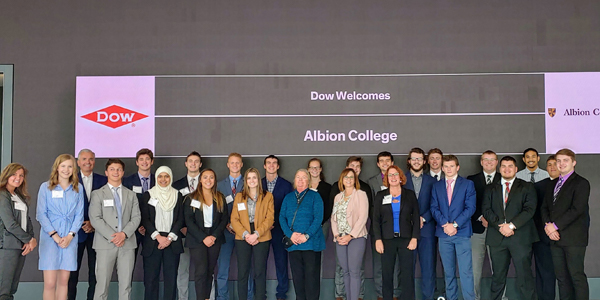 Students enrolled in the Carl A. Gerstacker Institute for Business and Management recently learned more about the institute’s namesake during a visit to Midland, 130 miles north of Albion, where Carl A. Gerstacker made his home and served as chairman of the board of Dow.

Gerstacker rose to lead Dow during a long and eventful career. During his time there he had many duties, from washing test tubes in 1938, to holding the position of chairman from 1960-76. Retiring in 1981, Gerstacker had been called the financial brains of the company.

On their May 21 trip, the 20 students participating in the institute’s summer session heard from current and former Dow executives as well as members of the Gerstacker family.

“As a resident of Midland, Carl Gerstacker also became an exemplary community leader and philanthropist. His impact remains visible today in this generation of Dow and Midland leaders,” said J. Donald Sheets, chairman of the Albion College Board of Trustees and retired vice chairman of Dow Corning Group. “With this trip, our students will more fully appreciate the unique pedigree of the Gerstacker philosophy, and hopefully they will be influenced in their future careers and community engagement by some of Mr. Gerstacker’s values and principles.”

That is exactly what Jared Fife, ’21, got from the experience.“This trip made me realize why I joined the Gerstacker Institute,” he said. “Having the opportunity to learn about Midland, Dow and Carl A. Gerstacker through his philanthropy, his business strategy and how he interacted with the people around him, made me realize how much one person and one company can do to have an impact on the community around them.”

Madison Partak, ’20, liked hearing about the Dow company culture, including its values around service and philanthropy.

“I learned so much about Carl Gerstacker and more about who he was as a person, a friend and a leader,” she said. “Being able to hear from his co-workers, friends and daughter really made him come to life for me and made me more proud of our program here at Albion. The trip got me thinking about how I can carry on part of his legacy within my career path.”

The Gerstacker Institute, created by the College in 1973 as the Professional Management Program, is a national leader among undergraduate offerings in the ways that students are put into real-world situations in order to gain practical experience outside the classroom. To complement their liberal arts and business-related courses, Gerstacker students attend workshops, listen to and interact with various speakers, and participate in full-time internships.

Carl Gerstacker’s philosophy was to “never be afraid to take on a really tough problem. When you solve it, the benefits will be that much greater.”

Students of the Gerstacker Institute have a wealth of opportunities to examine and understand their strengths, their values, their beliefs and the careers that best fit their passions. The institute has a rich tradition of producing graduates committed to making a difference in their workplaces and in their communities.