Austin Baidas, ’92, has put together a pretty impressive résumé in his years since graduating from Albion College.

After earning his degree in economics and management as a member of the Carl A. Gerstacker Institute for Business and Management, he went on to a successful business career as an executive in Michigan, Illinois and Indiana.

As well, he took active leadership roles in the 2010 election campaign of Illinois Governor Pat Quinn and Illinois state government before becoming a senior advisor for pipeline and hazardous material safety in the Obama Administration.

He gives back to the College by hosting an annual summer barbecue for entering first-year Chicagoland students and alumni at his home, and he has also invested in a scholarship supporting Albion students from Chicago. 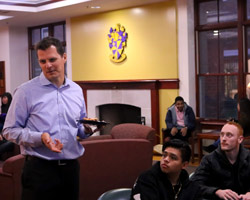 Baidas has also served on the boards of numerous organizations ranging from health care to homebuilding.

And now he can add the title of Visiting Scholar at Albion College.

Indeed, for three days in early November, Baidas shared his extensive background in business and public policy with several classes and more than 100 students. It was an experience like few he has had.

Baidas is the third visiting scholar to come to Albion as part of a budding initiative that began last year, and the first alumnus in the role. He plans to return for a second stint in February.

He recalled how he was at an Albion alumni-engagement experience in March in Chicago that was also attended by President Mauri Ditzler.

“Mauri started talking about his vision for the Ludington Center (which serves as the base for the Visiting Scholars Program),” Baidas said. “He wanted to bring back experts to talk about their experiences. I love Mauri’s vision for experiential learning and wanted to help out.”

So Baidas came to campus from November 8-10 and spoke to numerous classes, ranging from Intro to Public Service for students in the Gerald R. Ford Institute for Leadership in Public Policy and Service to Nonprofit and Government Accounting in Gerstacker.

His topics of discussion ranged from running a small business to banking/finance to economic development to the stock market to nonprofit management and more. He also held office hours to speak with students individually and had casual conversations with students over coffee in the Gerstacker International Entrepreneurial Exchange course and over pizza with current Albion students from Chicago.

Laurel Draudt, director of the Gerstacker Institute, believes that Baidas' standing as an alumnus spoke volumes to current students.

“I do think it resonated,” she said. “We do a lot with alumni. We bring them back a lot. And being a younger alumnus, they felt, ‘OK, that could be me in my career.’ He’s not at the end of his career, he’s learning and expanding and that’s what students are going though as well. There is that kinship.”

Baidas felt that as well. “I think that did hit home with some students,” he said. “Two decades or so ago, I was sitting in their position.”

And he brought those lessons to the level that today’s students could appreciate.

For example, in one of his classes he held a mini-“Shark Tank” style discussion, based on the TV show, in which students would present business ideas and he’d challenge them.

He also spoke to students about what the future could hold for them while expounding on how crucial a liberal arts education can be—an Albion education in particular.

“An Albion education prepares you for a career and for your life,” Baidas said. “I had a strong accounting background, which prepared me for work after Albion.”

He also emphasized the importance of a liberal arts background.

“It prepares you to think and it prepares you for life,” he said. “You’ll be ready to take on life. I had a pretty serious mid-career shift (from business to politics), and Albion prepares you to do different things in life. It tells you that doing new things is exciting.”

Baidas plans to help the Democratic candidate in next year’s Illinois governor’s race and has increased his efforts in helping to raise the awareness of Albion College. His work as a visiting scholar is part of that.

“It’s a way to carry on the tradition,” he said. “If I can help students, it’s the Albion way.”