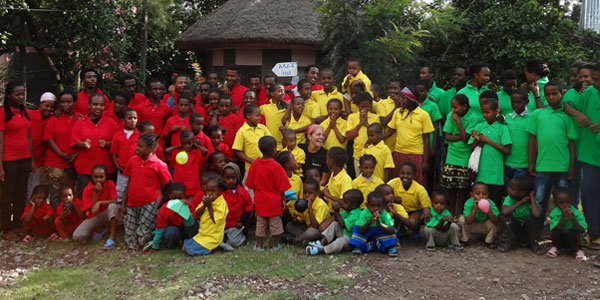 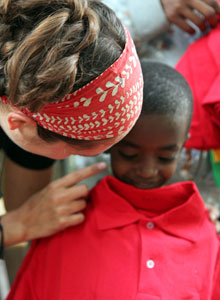 Mallory Brown, '08, was in the Republic of Sudan when U.S. Ambassador Chris Stevens was killed in neighboring Libya. "I was in Khartoum and the Sudanese people were protesting outside the embassy. I decided I should tell people I was Australian," she said. It was unavoidable, however, that Brown frequently had to show people her U.S. passport as she moved about the city. "Every time someone saw I was American, they told me, 'I'm going to make sure you're safe,'" she recalled. "I was never threatened and I never felt in danger. I was basically escorted across Africa by Africans, who just took it upon themselves to help me."

In the fall of 2012, Brown spent 100 days driving from Egypt to South Africa, distributing more than 600 T-shirts to children in orphanages and to many people she met along the way. Traveling in two Subaru Foresters with four other philanthropists, Brown and the group slept in tents and cooked meals over open fires. "I learned to start a fire with flint, change my car's oil, and negotiate all sorts of situations," she said. "Africa is intense. Navigating through the extreme road conditions, language barriers, diverse cultures, and unpredictable conditions was a huge challenge. It tested every part of my being, and I've truly learned what I'm made of." 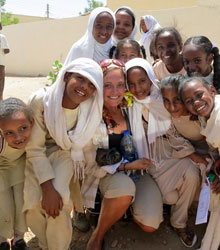 Brown's trip to Africa was the eventual result of an Albion College graduation gift, the opportunity to backpack in Asia and South America. "I was surprised to see how many people really needed quality clothing," Brown recounted. "I wanted do something to help."

In 2010, Brown launched World Clothes Line (WCL), a "buy one, give one" enterprise that donates a piece of clothing for every item sold. In less than two years, Brown completed her initial goal of distributing WCL clothing in Indonesia, Peru and the U.S.

Brown worked with each orphanage to purchase shirts from local suppliers. Despite the number of shirts distributed, Brown made each one a personal gift. "It takes hours but I spend time with each child," Brown said. "In addition to giving clothing, I give love and hopefully a sense of worth. I want each child to know they matter and that someone from the other side of the world cares about them." 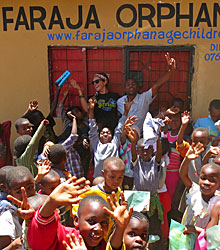 The orphanages Brown visited ranged from institutions supported by American nonprofits to an African couple who simply began taking in homeless children (their orphanage cares for more than 200 children). "Many of the kids have lost parents to AIDS. Life has not been easy," said Brown. "Some kids weren't used to being hugged or treated with affection. Some were shy, while others were really outgoing. But it's the best thing about what I do, seeing how much joy these clothes bring."

The success of her trip – and her company – has left Brown considering what's next. "When I started WCL, it was a passion project. I didn't know if it would work and what the future held," she said. "Now I have sponsors and partners, sales are going well, and I'm exploring expanding the company, hiring employees and being a boss. That's a big step."

Africa, however, convinced Brown that philanthropic entrepreneurship is where she should be. "I was in Africa longer than my original plans, and it gave me the opportunity to dive deep into the Third World. I've come home more focused and more determined to make World Clothes Line a success." she said. "I see myself as a bridge between people. My mission is one of global humility that encourages kindness, awareness, and cross-cultural understanding. It gives a glimpse into the needs of others and I hope it inspires customers to help."