For Craig Kirby, '85, a Public Service Career Has Fit Him to a Tee

He learned to play golf at Albion. Now his nonprofit group seeks to increase the game’s diversity.

It began, Craig Kirby insists, with a cheeseburger. 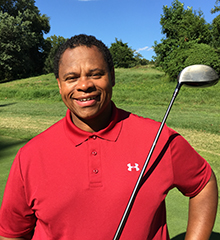 “I tell people I’ve been so fortunate because so much has been given to me,” says Craig Kirby, ’85. “I know Albion helped set the stage for it.”“People know how much I love burgers, especially cheeseburgers,” said Kirby, ’85, recalling his first-ever visit to Albion College as a high school senior from his home in Dayton, Ohio.

During his visit, he stepped into Lower Baldwin’s Old Keller for lunch and his life was forever altered.

“They had something called a Briton Burger and I was sold on Albion,” he says with a laugh. “When I tell that story, people say, ‘Are you serious?’ It’s all about the real stuff.”

It has been all about the real stuff ever since for Kirby, whose journey to, and from, Albion has been studded with remarkable experiences that have included working with the likes of Rev. Jesse Jackson and Senator Gary Hart, President Bill Clinton and Vice President Al Gore. He has talked with Nelson Mandela and Bishop Desmond Tutu and shared a vodka with Russian President Boris Yeltsin.

He has traveled the world and seen much and now he’s back in Washington, D.C. with a nonprofit endeavor that he hopes will introduce children of color to the game of golf through his creation, Golf. My Future. My Game.

“I tell people I’ve been so fortunate because so much has been given to me,” said Kirby, who majored in speech communications and political science and who was chair of the Student Senate and a member of the Gerald R. Ford Institute for Leadership in Public Policy and Service. “And I know Albion helped set the stage for it. My father would always tell me, ‘In order to make a difference, you have to know there is a difference.’ That’s what Albion did for me.”

Kirby came to Albion to play football for coach Frank Joranko. An offensive guard in high school, he knew he wanted to continue playing at some level collegiately, and when a friend told him about Albion, he decided to check it out.

Then came the Briton Burger and, well, the rest took care of itself.

“It was the sauce, man,” said Kirby, who to this day keeps a notebook of the best burgers he’s eaten in the D.C. area, broken down by top 10 and by price. “The pickles and the sauce. My mom and dad looked at me and said, ‘We’ve raised a complete idiot.’“

Finding Himself and a Friend

At Albion’s freshman orientation, Kirby was housed with Joe Magee, who hailed from Grosse Pointe Woods, worlds away from each other.

“Craig and I both had extensive student government experience in high school, so maybe the college thought we had that in common,” said Magee, ’85.

They got along great and when it came time to choose roommates for the school year, the two gravitated toward each other.

They would be roommates from then on at Albion, and they have remained friends ever since.

“We talked about this the other day and what a conspiracy of fate put us together,” said Magee, who is the head of project management for LIXIL North American, a building products company in New Jersey. “We still call each other, and when he answers he always says, ‘Hey, roomie.’”

Kirby dove into Albion campus life, receiving invitations to join every fraternity and missing few opportunities to enjoy what a college campus had to offer.

“I was so involved I was on academic probation [as a first-semester sophomore],” he said.

He said his turning point came in a sophomore accounting exam with economics and management professor John Bedient. Had he failed his exam, he said, he’d be out of school.

“I was sitting right next to a student who had a 4.0 average and I could see her answers,” he said. “But a little voice came to me and said, ‘If you’re going to flunk out of school, do it on your own.’ I ended up getting all the answers correct including the extra credit.”

He gained a Presidential Scholarship the next year and graduated in 3½ years while being elected and re-elected chairman of the Student Senate and working two internships, including one with Senator Hart of Colorado.

Working in the White House

Kirby’s interest in politics was developed at Albion, and in 1986 he moved to D.C. to work with Jackson’s Rainbow Coalition, becoming one of his point men as Jackson prepared to run for president in 1988.

”He taught me that everyone has something of value to offer." Kirby said.

He joined the Clinton Administration in 1993, working as a special assistant for Chief of Staff Mack McLarty. And to say it was a long way from eating a Briton Burger at the Keller is an understatement.

“My office was in the West Wing of the White House,” Kirby said. “I flew on Air Force 1 and 2 (the vice presidential plane). I met people I never imagined I’d meet.”

Kirby traveled to a U.S.-Russian summit in April 1993, in Vancouver, Canada, when he met Russian President Boris Yeltsin and the two became brief but fast friends, sharing vodkas together.

And when Vice President Al Gore visited Russia in 1996, Kirby recalls how the gregarious Russian leader pointed to Kirby and laughed.

“Yeltsin and I are having vodkas in the Kremlin,” Kirby said.

“We had a two-minute conversation, but the things he told me in those two minutes I’ll never forget,” Kirby said. “One thing President Mandela shared was, ‘If you can touch it, you can be it.’ This man proves there’s a higher being.”

For more than 35 years Kirby was involved in politics and public service. He had been involved in presidential campaigns for Bill Clinton, Gore, Jackson and Virginia Senator Mark Warner and had done more in the arena than he ever imagined.

“But I decided I’ve done it and it was time to move on,” he said. “As I learned at Albion, it’s time to help others to have the lives they never knew they could have.”

Bringing Golf to a New Generation 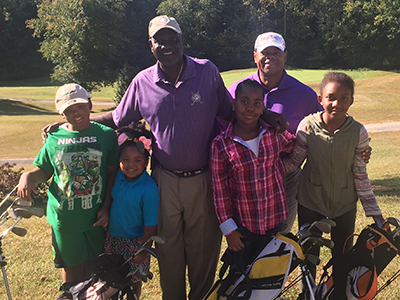 Craig Kirby (back right) has spent more than 25 years in the field of public policy and service and is now coordinating a nonprofit called Golf. My Future. My Game, which is introducing children of color to golf and expanding the diversity of the game.His deep and vast contacts in politics brought him in contact with Professional Golf Association Tour Commissioner Tim Finchem, and the two had a long discussion about diversity, and the lack thereof, in golf. That led to Kirby starting his youth development program that opens doors, exposes opportunities and introduces a platform for a greater comfort level to the game of golf as well as the values it instills.

It was an interesting direction for Kirby because he had never even picked up a golf club until he was at Albion when several of his fraternity brothers invited him to play at nearby Tomac Woods Golf Course.

“I had never been on a golf course in my life,” he said. “I watched them and I hit the ball and I said, ‘I can do this.’ I did OK and they invited me back the next week.”

After several developmental years with his foundation, in 2013 Kirby was invited to the World Golf Foundation headquarters in Florida, where he presented his new idea called “Golf. My Future. My Game.”

“These are opportunities,” Kirby said. “That’s how I look at it and I got that from Albion. I may have been in the minority at Albion but I didn’t act like I was in the minority. I took the lead.”

It’s a trait Magee, who majored in history with a minor in English, saw early in his roomie.

“It was pretty hard to spend a day with a group of people and for them not to remember who he was and for him not to remember everyone,” he said. “He’s done a good amount of work in breaking down barriers. There may have been 50 Black students at Albion and he had a chance to interact with different students. Craig had an awareness of that. I watched Craig, as polished as he is, make that circumstance work.”

Today, his program continues to thrive not only in the Washington, D.C. area but nationally, where more than 500 kids have taken part so far.

“Now we have a program that’s tangible,” he said. “It’s been a labor of love. I bet on myself and on an idea that I believe in.”